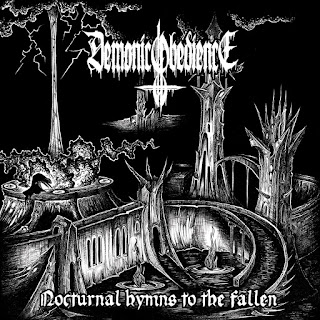 Now finding residence in Scotland, Greece-based one-man death/black metallers Demonic Obedience have brought their intensity and explosive fury to the forefront while trying to hold a connection to both places involving the projects’ residency. Taking a two-year gap between releases, the second full-length album was originally released May 18, 2016 in a co-release between Sevared Records and Satanath Records.

Combining their styles into one wholesale effect, this here manages to take on quite a few elements of each element here into creating a dark whole. That is primarily based around the album’s predominantly dark, churning riff-work that keeps this one charging along with plenty of ferocious death metal-styled rhythms as the majority of the tracks fall into agonized sprawling patterns or thumping chugs which keep the focus of the album firmly rooted in the death metal realm. The tighter, blackened rhythms featured here top off this effect with a stylized sense of controlled fury that accentuates the darkened atmosphere rather well as it  keeps alternating rather nicely between these variations and offers the album quite a generally positive experience by not getting bogged down in the one-note approach so many efforts who attempt this style also make. Flying between faster, more up-tempo numbers with churning riffing alongside the slower, more agonized sprawling sections does manage to give this a distinct variety within itself, but it also manages to highlight the fact that there’s not a whole lot of differentiability within the tracks themselves, which tend to focus on the same few select rhythms within here and never changes the overall rhythms or approaches here, ending up causing the album to run together quite easily here especially in the second half where it’s entirely possible to lose where you are in the running order as the tracks have already yielded their surprises and don’t really offer the surprise variations that were featured in the top half. Otherwise there’s not a whole lot to dislike here.

Though it’s quite familiar and tends to run itself into the ground without much variation throughout here, there’s still such a prominent and powerful attack at the core of the film that it manages to overcome a lot of those issues and manages to hold itself up enough to make for a worthwhile choice for any fan of the style or his previous works as well.

Does it sound good? Order it from here:
https://satanath.bandcamp.com/album/sat149-demonic-obedience-nocturnal-hymns-to-the-fallen-2016
Posted by slayrrr666 at 10:44 AM