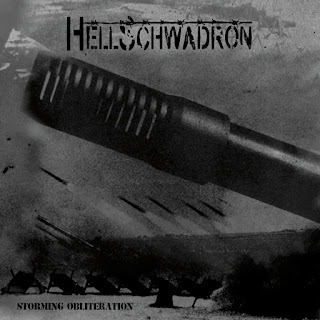 Quickly storming onto the scene, German/American black/thrashers Hellschwadron have combined together from various projects to create a rather vicious and utterly pummeling assault of old-school black and thrash metal. Unleashing a concept album about World War I and II, the two-piece project is ready to release their full-length debut July 15, 2016 on Mercenary Musik.

From the outset the band here is quite proficient and effective at generating the kind of explosive, frenzied old-school styled attack that’s quite prominently displayed here. The rattling rhythms displayed here are quite effective at thrashing along with a furious intensity and energy that gives this one the ravenous ferocity here which is quite impressive while offering plenty of blaring rhythms with the buzzing riff-work humming along nicely with these intense blasting tracks carrying on throughout here. Even more to this point if the album’s utterly raging sound which lets that blaring beast of a rhythm section generate a truly captivating energy here as it blares along incredibly well with the frantic blasts unleashing throughout here while featuring the kind of simplistic and unwavering thrash riffing which gives this the kind of furious tone and aggression that matches the rather dark tone here with the incorporation of the black metal aesthetics to the music. For the most part this here is quite the savage offering, even if there’s quite a dynamic and same-sounding effort here that comes into play with this one having no real variation at all between the majority of the tracks as it’s basically one extra-long blur of sonic violence dished out. That works in small doses, though it’s somewhat more complicated here by the exhaustive running time that’s far too bloated on an album that probably could’ve used a minor trim here and there to eliminate this. However, it has nothing to do with the content of the music itself which is quite fun and enjoyable.

Though it’s only featured in a minor flaw with an issue that should get cleared up as the band carries along in their career, that’s not nearly enough to really hold this one back from being an utterly enjoyable burst of ravenous thrashing that makes for a worthwhile listen from fans of old-school thrash or any black/thrash aficionados.

Does it sound good? Order it from here:
http://symbolicartproductions.com/store/p3/Hellschwadron_-_Storming_Obliteration_CD.html
Posted by slayrrr666 at 11:45 AM