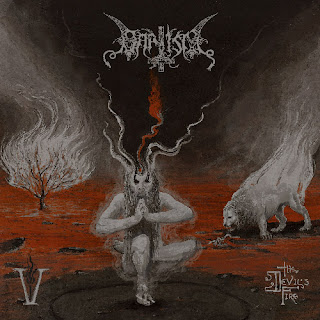 One of the scene’s most enigmatic artists, Finnish one-man black metallers Baptism continue to evolve around the lone artist Lord Sarcofagian who brings his years of experience to the project which captures the ravenous spirit of the genre’s old-school sound. Taking on vocal and guitar duties on the release while surrounding himself with various session musicians and several guest appearances from genre regulars, the fifth full-length release was issued July 26, 2016 on new-label Season of Mist Underground Activists.

From the onset here this one dwells heavily in the old-school scene popularized by their Finnish countrymen as they employ that ever-familiar swirling tremolo-picked pattern from the scene. This one goes for a simplistic, droning riffing style with a raw, gravelly atmosphere present throughout which is where this one really generates it’s strong, frantic rhythms quite well as there’s a savage, feral energy to these blistering tracks. Accompanying these fine rhythms is the addition of highly-melodic, sprawling set-pieces here which feature a rather pronounced easing off the throttle to allow the majestic keyboards to flow over with plenty of symphonic elements present alongside these blistering raw tracks which is quite an unusual yet still mostly effective set-up present here. Still, that does end up becoming the biggest problem to overcome here with the fact that these rhythm changes are handled in a rather clunky manner in this. Rather than build-up to a melodic outburst or working them into the track organically, they just seem to pop up out of nowhere in the track and seem to halt the momentum cold without much deviation at all which really makes them come off quite surprising when they occur which shouldn’t be a problem considering the bands’ as experienced as it is at making this type of music. It’s about the only thing holding this one back, though, as the rest of the music is quite solid and works incredibly well.

With a lot of rather enjoyable elements to be found here and not a great deal of flaws that aren’t that detrimental anyway, there’s a lot to really like with this one as the savageness and unrelenting ferocity of it’s attack overcomes the weaknesses and gives it a solid recommend for fans of the projects’ past work or the Scandinavian black metal scene in general.

Does it sound good? Order it from here:
http://baptismofficial.bandcamp.com/album/v-the-devils-fire
Posted by slayrrr666 at 9:19 AM