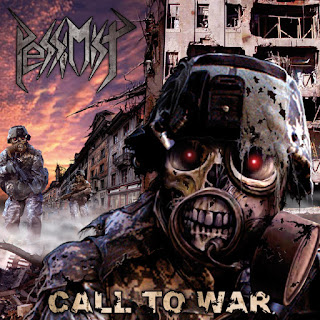 Formed in late 2006, the German thrash band Pessimist established the ability to perform spirited old-school German-styled thrash and shows plenty of signs of becoming one to watch in the future with an immensely enjoyable and polished effort from a band this young. Following several quickly-released demos and an EP, the prepares this debut full-length independently March 27, 2010 with  CD reissue December 10, 2010 on Firefield Records and a new reissue September 23, 2016 from MDD Records.

For the most part, this is a pretty impressive debut from a band that’s a lot better than it should to be this devastating and destructive this early in their career. A running feature throughout the album is the absolutely devastating guitar riffs employed here, which are tinged with that dirty, grimy sound that signals prime 80s-era German thrash to the fullest in the heavy, crunchy flavor. Filled with a destructive attitude, the riffing onslaught on display is a true assault managing to stuff the songs with an impressive array of riffs that are downright memorable as well as being virtuosic solo displays. Complete with thunderous double-bass drumming and a groovy, slinky set of bass-lines this here is some primo thrash that’s far better than expected to come from a band this early in the game. Now, stylistically, the second half here isn’t all that much different from the first half and features a majority of the same features, but there’s a minor flaw that does erupt from this set-up. The biggest difference in the two halves is the quality of the songwriting, with a clear and discernible ability to tell that the better songs are placed up at the top of the album while the weaker and clearly-less-interesting efforts are on the back half. Most of this is due to the songwriting rather than the performances, as the songs in and of themselves lack the spark of their preceding songs, coming off more like rehashes rather than being individual, unique tracks as the repetitive nature of the songs becomes apparent. This is certainly not a true flaw in the album, as the tracks can be enjoyable for some, but the somewhat subpar writing is apparent and drags it down rather than any sort of issue within the record. Still, it’s really the only thing really wrong with this one.

While the second half here is of somewhat lesser quality than the first in the songwriting department that leaves them without the bite of the top half, sonically this is purely enjoyable and competent thrash that follows along the German template quite accurately and is heartily recommended to aficionados of German thrash or just plain pure thrash fans in general.

Does it sound good? Order the reissue from here:
https://pessimist-thrash.bandcamp.com/album/call-to-war-re-release
Posted by slayrrr666 at 12:55 PM