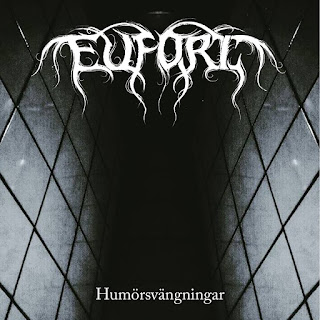 Formed in early 2016 in Stockholm, Swedish depressive black metallers Eufori came together when members of the band Mist of Misery found out that ideas written originally for that band didn’t fit within the context of that sound and formed a separate band to share those releases. Following an EP release earlier in the year, the duo’s full-length debut was released September 30, 2016 on Black Lion Productions.

From the beginning this one makes it pretty clear how much it takes on the depressive nature of this chosen style by really working the simplicity of the structures quite well. The droning, chilling tremolo riffing here and the hauntingly slow, simple arrangements here alongside the one-note drumming makes for a loose, solitary experience wherein the cold nature of the material makes for a fine atmospheric vibe within here. That atmosphere, aided alongside with the swirling riff-work in massive, sprawling methods with plenty of endless simple-minded acoustic strumming or just straightforward simplistic riffing here repeating the same rhythm on repeat for long stretches of time gives this more of an atmospheric feel here that goes well in hand with the hoarse, shrieking vocals which further tie this one into the depressive realm as they mesh perfectly with the cold, isolated riff-work. While there’s an outburst of somewhat lighter and less depressive riffing throughout here, this is only done on several occasions and really sticks out here as being too out-of-tune with what’s being attempted here as this bouncy material goes against the solitary, lonely atmosphere of the rest of the tracks. The overly simplistic vibe throughout here might be quite troubling for some here as there’s just not all that much variation here beyond a wholly simple-minded approach which generates quite a one-note feeling in here in regards to plenty of others out there which show some slightly more dynamic approaches against this one.

Though the simple-minded approach found here does give this one a rather rudimentary feel in the genre, there’s more than enough solid points of interest here that it remains quite a worthwhile listen for fans of the members’ other project or the depressive/suicidal genre in general though those looking for something more dynamic in the genre should heed caution.

Does it sound good? Order it from here:
https://euforilblacklion.bandcamp.com/album/hum-rsv-ngningar
Posted by slayrrr666 at 11:55 AM