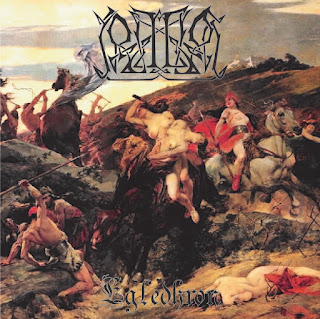 Formed just in 2015, Venezuelan one-man atmospheric black metallers Irillion have formed themselves into a solid semblance of atmospheric black metal as the instrumental portion of their attack is a rather true portion of the style. As sole composer and instrumentalist Rayner V. continues along his fine quest, the project's debut release was originally self-released digitally September 24, 2016.

On the whole this here is wholly simplistic and rather primitive-styled black metal built around low-fi, swirling tremolo riffing and buzzing basslines while featuring raw, thudding drumming pound away in the background. The simple-minded riffing is given quite a free-reign of the material here which lets the atmospheric passages weigh on this one quite heavily with the straightforward arrangements bringing that buzzing tone and tremolo riff-work to let the band be able to switch over quite nicely from the blaring riffing to a more relaxed, melodic atmosphere. This comes off rather nicely throughout here with a nice deal of variety thrown into the mix, though the album’s overall simplistic nature does seem to strike up a series of overly familiar patterns and rhythms quite easily. This one tends to run into the same overall patterns quite early and often with long stretches of the running time devoted to simplistic strumming and plodding tempos over and over again which does evoke a fine atmosphere as was intended even though it’s quite repetitious and could certainly get hammered out over time. Likewise, the raw recording material is a bit much for this one to take at times with the weak-sounding material likely putting some off who care more for a professional, polished sort of material. Though these do hamper the project, they’re somewhat excusable due to being part of their debut release.

Despite a few minor issues here holding it back that are more likely concerned with being involved in a debut release and can be somewhat excused and forgiven here, the remaining parts here are certainly worthwhile enough for those who can look past those for some decent-enough and overly simplistic atmospheric black metal.


Does it sound good? Order it from here:
https://irillion.bandcamp.com/
Posted by slayrrr666 at 11:19 AM