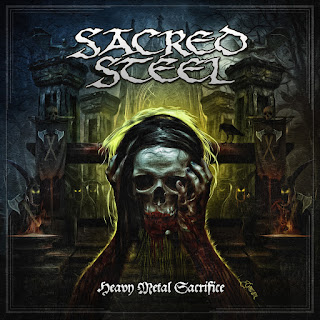 As is to be expected here, there’s not a whole lot of deviation or difference here on what was present in their past works. This is a generally fast-paced assault of traditional metal that dives around frantic, fast-paced and generally explosive rhythms. This is generally of a majestic, epic quality here due mostly due to the overwhelming influence of epically-tinged power metal style melodies to the rhythms which give this the kind of melodic sensibility alongside the charging traditional metal riffing that powers this one for the most part. As well, the mid-tempo work here plods along at a rather generous pace that’s several ticks down from the fuller, more dynamic full-throttle tracks yet still carries enough of a bouncy up-tempo gallop that it readily manages to carry the melody to a more formidable point on the album. The ability to mix that all together into a toughened form of traditional metal with influences of power and speed metal in the riff-work carries itself incredibly well and manages to really make for a professional, powerful release. While none of this is new at all and feels like most other variants of their style, it’s still the consistency and effortless manner that the band is able to generate this kind of epic, melodic music efficiently and effectively, which is where this one really works well. As usual, the vocals can tend to grate on the nerves with the high-pitched wailing prominent but it’s a part of their style by now that it’s not an issue at all.

Showing no signs of quit here, there’s plenty to absolutely like about this release which is yet another stellar showcase of their style that there’s little need to pick apart the flaws that mainly serve as individual choices anyway here that the fans of the bands’ past or general power/traditional metal aficionados won’t be disappointed with this one.


Does it sound good? Order it from here:
https://sacredsteel.bandcamp.com/album/heavy-metal-sacrifice-2
Posted by slayrrr666 at 10:55 AM