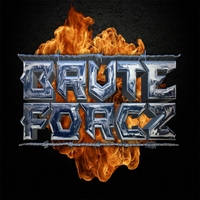 After initially starting their career, Los Angeles heavy metallers Brute Forcz have taken the pain and struggle of the last few years dealing with injuries, surgeries, bad finances, departures, and even death that have held up their career path. Now finally returning after a four-year hiatus with a new four-track release, this new EP brings the power-trio back together for a self-released January 2016 release.

As was present on their past efforts, the band plays a vibrant and generally explosive attack of simplistic old-school heavy metal loaded with all manner of classic heavy metal rhythms. The charging tempos on display allow the group to maneuver along through a select amount of traditional metal-inspired metal riffing that has a distinctly straightforward approach due to the constantly buzzing bass-lines rumbling along throughout here which keeps the music fairly balanced while generating the kind fiery base-line needed to make the music somewhat up-tempo and catchy. The fact that the release only features four tracks, though, brings out the main problem with the group in that they really epitomize the concept of the one-trick affair as the group is a simplistic-but-enjoyable affair when the music is a bit more upbeat and fiery but when they drop the tempos into a more relaxed chug-based attack the music is boring, plodding and exceptionally dull as there’s no real dynamics or variation to really liven things up, a feat that also manages to pop up on those livelier ones as well with the fact that there’s just not a whole lot on display here once you’ve heard the bands’ basic attack. They generate a fine tempo and enthusiastic energy, but beyond that there’s not much else here.

Being quite short and brief which really highlights the bands’ flaws quite easily and openly, there’s not a whole lot to really get worked up with about this release other than perhaps the most dedicated trad-metal aficionado or fans of this simplistic heavy metal style.

Does it sound good? Order it from here:
http://www.cdbaby.com/Artist/BRUTEFORCZ
Posted by slayrrr666 at 10:26 AM