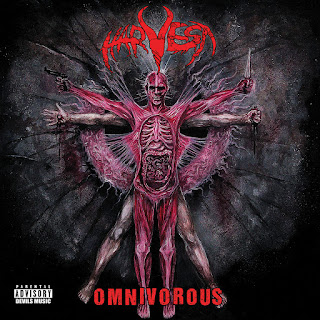 Formed in late 2012, Panamanian death metallers Harvest have completely taken several years to produce their sound and have taken on their rather intense and aggressive styling through rabid live appearances which have brought them to their current state. Finally able to generate enough material for their first release, their debut EP was originally released May 31, 2016 in a co-release between Evil Records and Symbol of Damnation Productions.

Bringing their sound to the forefront, the bands’ main strength here is the ability to generate a high degree of churning death and thrash metal with plenty of churning groove elements. Though the main formation is built around the death/thrash mixture here where it’s heavily focused on the deep, churning riffing and fiery energetic patterns that add a great deal of energy into the patterns to make for a mostly fun and engaging up-tempo burst of aggression which manages to keep this one going along at a pretty rapid pace for the most part. When that gets added to the groove-centered rhythms added alongside these engaging and generally straightforward patterns the result is a fast and violent affair with the deep, churning crunch offered by the riffing turning into a prominent attack here with the album shifting from the galloping thrash to a stuttering groove charge alternatively within the tracks. On the whole this is quite fun and really gets a lot out of the music here, though it’s still not all that well-developed here with some awkward and clunky transitions into these different sections within the album standing out and causing it to result in some sluggish tempos here within the tracks rather than simply generating a more coherent feel with album feeling a little too scattershot because of the different transitions. While this is still a debut release and can be overlooked quite easily, there’s still this aspect that needs to be brought up.

Not necessarily the most advanced or competent at generating this desired kind of mixture that others are far more capable of accomplishing, there’s still some fine work done here that overcomes those flaws somewhat, which should still be taken into account of being their first work, that this is a band to watch for fans of death/thrash or big on violent, aggressive modern metal.

Does it sound good? Order it from here:
https://symbolofdomination.bandcamp.com/album/sodp063-harvest-omnivorous-ep-2016
Posted by slayrrr666 at 11:59 AM