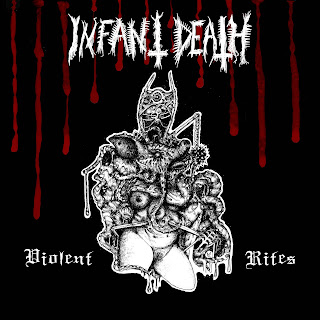 Simply gaining in experience with each release, Norwegian black/thrashers Infant Death have gained a formidable reputation following their previous releases and continues to showcase their frenzied and schizophrenic sound to the fullest old-school appeal. Following a split release earlier in the year and with a two-year gap between releases, the power-trio prepares it’s third full-length effort September 23, 2016 on Apocalyptic Empire Records.

As has been the bands’ style, this here is a series of ravenous, tightly-wound speed metal throughout the album which pretty much carries this one along without much deviation at all and really makes for quite the impressive attack. The charging, blistering speed and utterly relentless tempos here generated by the frantic, raving riffing makes for the tightly-wound rhythms that are characterized by their speed metal leanings while also managing to incorporate the styles template for raging, chaotic patterns that generally make for an out-of-control feeling. That inherent speed and tight, dense thrashing style is quite reckless in doling out it’s rhythms here which is an utterly enjoyable and dynamic charge that makes this one so enjoyable as there’s generally no let-up from the attack, and with the utterly furious patterns full of those frenzied arrangements on display that makes for an even tighter, more explosive offering as every track here is just utterly frantic and furious about doling out this style attack. Frankly, that does lead into the album’s one main minor flaw here in that it’s simply way too one-note with it’s approach as every track is generally a non-stop series of relentless insanity in the riffing generating a furious tempo throughout here which doesn’t change or deviate and it can lead to the album getting quite lost in itself rather easily. Because the tracks are generally indistinguishable from each other and they’re all pretty much the same length as well this one can become quite hard to tell where it’s at here and it can be a minor issue for some. However, this is barely a problem overall and isn’t too big of an issue with all the savage intensity on display.

Though this one is a pretty similar-sounding effort without much general difference between many of the tracks here, the album’s overall directness and savage approach makes this a far-more appealing and interesting effort as it goes along and generates plenty of interesting parts here for blackened thrash fans or speed metal aficionados.