Testament - The Brotherhood of the Snake 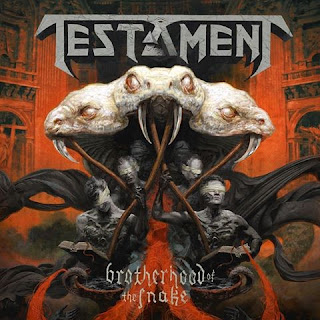 Still continuing to lead the underground, Bay Area thrash legends Testament have steadily risen in stature over the years to feature a discography that rivals many of their peers and puts them pound-for-pound as a top-tier level contender for the genre’s elite units. Following up their last album with a hiatus of only four years this time that sees founding bassist Greg Christian depart for a returning Steve DiGiorgio as well as Gene Hoglan moving from a session member to full-time drummer, their eleventh full-length album was released October 28, 2016 on Nuclear Blast Records.

As has become the norm since their late-90s resurgence, the majority of the album features the band’s now-trademark riffing style in full force. Employing their patented twin-guitar riffing style that carries this along with utterly ravenous precision, the record dives through a variety of strong, multi-tempo’d tracks that brings about a wholly vibrant thrashing energy while being able to drop back into a less-energetic but still hard-hitting rhythm for the main sections of the tracks. Mixed alongside these efforts are more simplistic, straightforward mid-tempo crunchers that are all quite adept at delving into their guitar-based muscle while easing off the throttle and providing a strong, perfectly crafted balance that makes the band so engaging and enjoyable. Their ability to adapt to these varying stylistic attacks, along with a heaping dose of melodic accessibility to match their strong riffing and tight, professionally-played performances, has been what’s made them so strong over the years and is a vital part of this one. Though these are all quite appealing for the most part, there’s still a small part of this one lacking that most important aspect of their signature sound which is the more memorable and vicious riffing. This really seems to opt for more straightforward rhythms and simplistic paces here which never really develops that one over-enthusiastic blast of raging thrash that has followed the band throughout their career, and too much of this one is stuck in the mid-tempo for the majority of their tracks and it really becomes noticeable on the second half where it’s not as engaging being filled with admittedly weak and filler tracks which is hardly a facet found in their career until now. It’s undoubtedly fun, but doesn’t extract that one factor which has been featured on their more prominent efforts.

As the band is still one of the more prominent and respected bands in the genre, this release still manages to solidly fit in their discography even with a few rather clunky, disposable tracks as the overall sense of fun established here makes this one far better than most attempts at the style and is still a solid choice for all fans of their previous work and thrashers in general.

Does it sound good? Order it from here:
http://shop.nuclearblast.com/en/products/sound/cd/cd-digi/testament-brotherhood-of-the-snake-digipak-.html
Posted by slayrrr666 at 10:41 AM