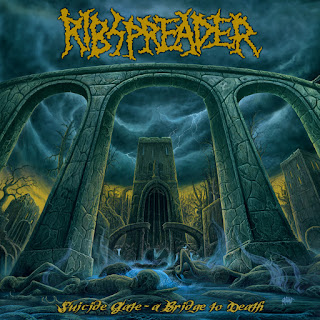 One of his never-ending projects, Swedish death metallers Ribspreader are another in the large crop of bands from Rogga Johansson which he uses to spread his passion of old-school death metal as this one is one of the longest lasting efforts. With drummer Brynjar Helgetun and guitarist Andreas Carlsson being replaced by Jeramie Kling and Taylor Nordberg respectively, the groups’ sixth full-length is released June 15, 2016 on new-label Xtreem Music.

Whereas the majority of the bands are more of a straightforward old-school act, this particular entity of Rogga’s centers around a stylish worship of the Swedish scene in general. This one manages to take on that typically grinding buzzsaw riffing style complete with the swirling thrash melodies to offer up the kind of speed-drenched efforts that reek of that atmosphere and power that come from the album’s near-continuous onslaught of ravenous riff-work in this dynamic style. Working in that presence of dread and doom here in which they add in a slightly more pronounced galloping pace that acts as a melodic sprawl against the ravenous actions elsewhere while bringing about plenty of tight rhythms and atmosphere here to counteract the driving intensity displayed here. This attack is quite impressive and enjoyable for the most part with the album going between the ravenous and the more reserved sections in a rather fine variety, even if the album isn’t really all that original or creative for the most part. It steals from the playbook of so many other acts from this time-period and style that there’s not much about it that really stands out beyond the energy and enthusiasm from the tracks, and for the most part is what really holds this one back.

Generating plenty of ravenous Swedish-styled influences together for one rather fine project that doesn’t really do much interesting or original work here which harms this one somewhat enough in order to really leave this for the most devout followers of Swedish death metal, Rogga aficionados or old-school death fans in general while others should heed caution here due to its issues.

Does it sound good? Order it from here:
http://xtreemmusic.bandcamp.com/album/suicide-gate-a-bridge-to-death
Posted by slayrrr666 at 10:37 AM