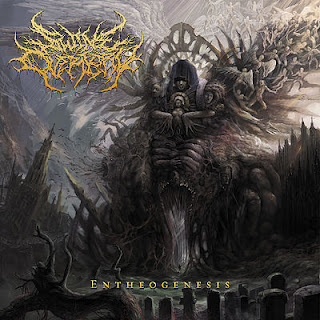 An almost-exclusive internet collaboration, US slammers Swine Overlord have brought plenty of progressive touches to the brutal death metal realm as the band goes further than before in this style than they have previously. A densely-layered concept album which offers a unique look at the development of the human psyche through the lens of western religion and eastern spirituality, the group’s sophomore album was originally released September 23, 2016 on Gore House Productions.

This here continues to showcase one of the finest bands in the genre working through quite an impressive and enjoyable repertoire of brutal death metal. Taking that tight, obliterating riff-work through heavy, dense slams and plenty of savage tempos creates a rather harsh and dynamic soundscape that delivers a strikingly ominous tone here with the sweeping rhythm patterns, leaving this one with quite a striking balance throughout. Alongside these efforts are far more built around the album’s more technically-challenging riffing which takes on progressively-tinged noodling, sprawling atmospheric sections with light tinged riffing and a rather more explosive series of paces compared to the more straightforward slam-based tracks which just crush onward with one slam after another. That highly dynamic variety is offered throughout here and really makes for a more engaging offering as the darker rhythmic work is quite well meshed alongside the light atmospheric noodling on display leaving this with a fine overall attack. There’s only a few small issues to be had here which lower this one slightly which comes from the album’s set-up as a concept album which means there’s several short interludes which signify the changes in the storyline yet do nothing but really break up the momentum brought about by the change in styles between the tracks and really could’ve been changed. That also takes into account it’s next issue, which is the overlong running order as it’s a pretty hefty, beefy album to get through and putting in these short interludes is a cause of that occurring. Otherwise, there’s not a whole lot really wrong with this one.

Though there’s a few issues here with the album in that it’s a touch too long and doesn’t really seem to have much use for it’s interludes beyond stretching it out, there’s still more than enough to really enjoy here with this one that this is a worthwhile choice for any slammer or fan of brutal death metal in general.

Does it sound good? Order it from here:
http://gorehouseproductions.bandcamp.com/album/entheogenesis
Posted by slayrrr666 at 1:22 PM