Johansson and Speckmann - Mask of the Treacherous 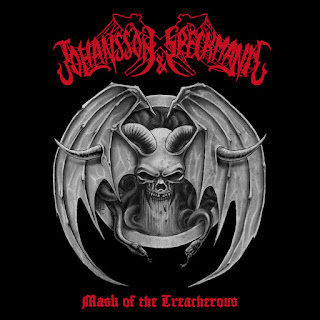 Artist: Johansson and Speckmann
Release Title: Mask of the Treacherous
Year: 2015
Label: Vic Records
Genre: Old-School Death Metal
Tracklisting:
1. Mask of the Treacherous
2. Inhuman Lust
3. Through the Filth and Riddled Ages
4. The Wicked Marches On
5. The Bringer of Pain
6. I'll End Your Rotten Life
7. Within Reach
8. Enslaved in Filth
9. A Grave for This World

Furthering their success from the previous album, International death metal collaboration Johansson and Speckmann are certainly putting their collective might together in this project that brings the two luminaries together once again for a spectacular assault of old-school death metal. Gaining in their abilities from the previous release, the project’s second full-length record was released February 23, 2015 on Vic Records.

As befits the status of the men involved here, this is their usually simplistic and overly primitive-styled mixture of straightforward death metal augmented with strong thrashing overtones. This utterly simplistic and not all that varied music within here allows it either to be a rather tight and ferocious charge swirling with mid-tempo agonized riffing and plodding paces or generates a crunchy thrash-laden series of rhythms that offer up some rather frantic and blistering efforts. It works quite well in keeping that nicely mixed with the attacks getting balanced incredibly well between the churning old-school riffing with the thrashing energy, and it really sounds like a full-on mixture of both artists’ main groups. Going for the mix of tight, churning thrash with the agonized sprawling rhythms really gives this the album’s greatest strength as there’s a slight variance between the styles in terms of the different approaches reaching a rather strong approach for the old-school tactics that are featured within here. While there’s plenty of rather enjoyable work here because of that, it tends to run itself into quite predictable realms because it’s all about letting their main bands come together in one area without much deviation and it does crop up as something within this one. The tracks really fall into either category and it does have a really simplistic attack that does really affect this one slightly. Still, it’s got plenty to really like here in other regards.

Though it does find itself losing a little bit in the overall set-up with the approach running itself too close to each other at times, this one still manages to effectively capture the old-school feeling from both members that this overcomes the flaws for the most part and becomes a wholly appealing choice for fans of either members’ projects or old-school death metal in general.

Does it sound good? Order it from here:
http://vicrecords.com/shop/index.php?id_product=50&controller=product&search_query=johansson&results=7
Posted by slayrrr666 at 10:34 AM