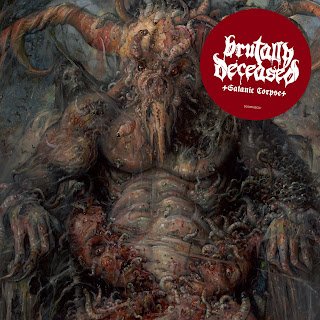 Artist: Brutally Deceased
Release Title: Satanic Corpse
Year: 2016
Label: Doomentia Records
Genre: Swedish Death Metal
Tracklisting:
1. The Art of Dying
2. The Disclosure (In the Circle of Thy Bowels)
3. Hostile Earth
4. Epoch of Self-Denial
5. Where No Gods Dare
6. Ruthless Cleansing
7. Withstanding the Funeral
8. At One With the Dead
9. In Torment We Shall Strive

Not exactly an expected location, Czech Republic death metallers Brutally Deceased has continued to forego more traditional sounds of their home country for a straight-up Swedish-influenced assault that’s been their trademark starting in 2007 when they formed. Furthering their connection with Doomentia Records, the groups’ third album is released August 18, 2016.

From the outset here this one is straightforward and utterly unrepentant Swedish-influenced death metal that takes it’s cues straight from the heart of Stockholm with it’s deep swirling buzzsaw grooves and churning riff-work. These here are the mostly up-tempo and vicious tracks which manage to make for a mostly familiar if still blasting charge through the Swedish death metal scene that takes these cues and riffing patterns from those efforts and incorporates that same sort of melodic harmonies as well into the rhythms along the way. With these efforts likewise graced by more mid-tempo efforts that take those same stylish rhythms into several rather solid and enjoyable mid-tempo efforts that plod along with some more mid-tempo elements that slow it down and really let the grooves breathe which is all part of the traditional and usual elements found in the style. That affects the shorter tracks here significantly which manages to go for the album’s biggest detrimental factor here with this one managing to just feel too light and brief to really make an impact as it’s just over so quickly that there’s not much opportunity to really explore many variations and change-overs here with this due to the rather familiar riffing and rhythms. It’s not all that bad but it does crop up throughout here.

Though it gives itself a rather familiar and overly-stock charge that makes for a rather unoriginal effort, it’s got that ever-present and still enjoyable groove to it that easily makes this a solid-if-unremarkable choice for ardent Swedeath fanatics only while those who prefer more variety and originality should look to other practitioners first before inquiring here.

Does it sound good? Order it from here:
http://doomentiarecords.bandcamp.com/album/satanic-corpse
Posted by slayrrr666 at 10:45 AM