Paganizer - On the Outskirts of Hades EP 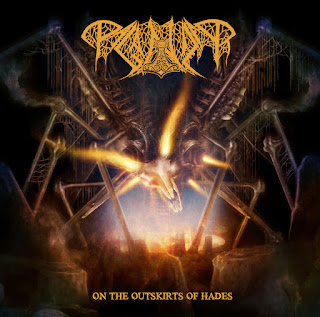 Part of Rogga Johansson’s never-ending cycle of bands, Swedish death metallers Paganizer are his main band and one of the oldest of his projects dedicated to his passion and love for Swedish-sounding death metal that runs through his dozens of projects. The third of three EPs released by the project during the calendar year, this new release of ravenous death metal was issued August 1, 2016 on Transcending Obscurity Records.

As is to be expected here, this one is pretty simple to determine it’s old-school Swedish-influenced death metal sound with a rather furious and vicious blast of charging up-tempo death metal. The material is wholly simplistic and take on the swirling buzzsaw grooves popularized by the bands first coming out of Sweden in the early-90s though warped through a more Floridian tone that adds varied sense of dynamics and cutting tone rather than the infamous chainsaw-laced charge that completes the traditional Swedish model. Likewise, the ability to shift gears into a more straightforward doom-like charge that adds a sprawling urgency to it that completes the old-school feel. This is a truly enjoyable burst of old-school death metal and is really only undone by the fact that only has four tracks which ends this one so early that it just ends up being quite abrupt and just quite quickly, leaving this one with a weird ending rush. Otherwise, this one has a score of positive material to like here.

Being just a touch too short to really get the most bang out of it’s attack, this one still manages to offer up such a solid, overall blistering account of Swedish-influenced death metal here that this one really should work well for all fans of this kind of death metal or Rogga’s projects in general.

Does it sound good? Order it from here:
http://paganizer.bandcamp.com/album/on-the-outskirts-of-hades-death-metal
Posted by slayrrr666 at 10:21 AM