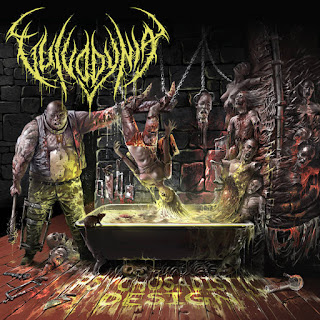 Having burst into the scene’s conscious, South African slammers Vulvodynia have managed to become one of the top acts in the style with their dynamic blend of brutal, heavy and inhumanely powerful sound which has turned them into a force to be reckoned with. Continuing to infuse more technicality into their slam, the group’s second full-length album was originally released June 30, 2016 on new-label Lacerated Enemy Records.

As has become the norm for the band, the whole exercise is built around the ultra-deep churning riffing bringing along wave after wave of pummeling slams. The ability of the band to wrap these slams around tight, squealing rhythms and deep, chugging breakdowns gives this one the stuttering, steady patterns featured commonly in deathcore-centered rhythms as the mid-tempo rhythms provide a sterling launching point to follow up on the overdose of slamming patterns. This slam-heavy approach is all given a brutal beatdown in the continued usage of frenzied, explosive technically-challenging riffing that was introduced in their last release and adds a strong dynamic to the bands’ approach by allowing the infusion of tight, frantic riffing that piles on the slams in the slower tempos while offering an alternative in the upper tempos that still manages to whip out plenty of high-impact brutality that goes along so well together. That really does leave this one with a rather enjoyable attack that’s ferocious, impactful and devastating while showcasing only a few minor issues here. They can cool it on the lame horror-film samples that nearly everyone uses in their intros and bring aboard a slightly more cohesive sense of spacing here with the album’s organization being a little shoddy, but overall there’s plenty to enjoy here.

Still quite evocative of their style and generally one of the more explosive and enjoyable efforts in the genre, there’s so much to really enjoy here that this one manages to get quite a large number of brutal death fans on it’s side as there’s plenty for those into the slam-heavy side or the more traditional practitioners alike.

Does it sound good? Order it from here:
http://laceratedenemyrecords.bandcamp.com/album/vulvodynia-psychosadistic-design
Posted by slayrrr666 at 3:37 PM