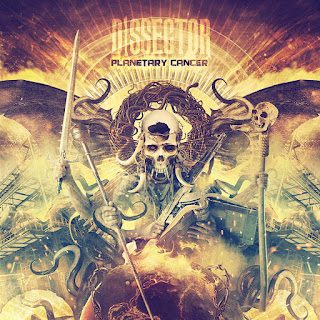 Still continuing their assault, Russian melodic death metal band Dissector further manages to build their legacy as one of the country’s finest genre acts as they further their recent success. Joined by a litany of popular guest musicians as they display their signature sound, the group prepares to release only their second full-length release June 6, 2016 on Mazzar Records.

Once this gets going, there’s a rather obvious display to be found here where the band is clearly more comfortable on the mid-tempo setting in their sound where it really manages to thump along at a simplistic tempo overall. Baring a light, sprawling tone with a focus on offering a crunchy chug-filled pattern that takes simplistic rhythms and plodding drumming along throughout here for the most part, this basic attack keeps things rolling along at a pretty steady clip without generating a lot in the way of offering a lot to showcase any special variety or special impact here as it’s rather formulaic how their approach is worked over on this. It’s all tight, simplistic sprawling chugging that generates the melodic framework with the light leads swirling around the main rhythms here and that makes this quite predictable as it goes along with the inability to really change up the rhythms or arrangements to a large degree. There’s a few occasions where it generates a much more lively rhythm pattern with some frantic, somewhat frenzied riff-work that makes this one a little more engaging, but it’s only in select places within the album and not every track utilizes this anyway which just makes it stick out even more. Likewise, there’s way too many songs here for that kind of material and really makes the second half quite a chore to sit through with so many repetitious patterns holding this one back.

Through it does have some problems here that tends to crop up from time-to-time as the songs are merely decent-enough at best and don’t really offer much to stand out beyond the professionalism of their performances, it’s really only down to the bands’ hardcore fans or the most devout melodeath fan who’ll enjoy this one.

Does it sound good? Order it from here:
https://dissector.bandcamp.com/
Posted by slayrrr666 at 12:33 PM