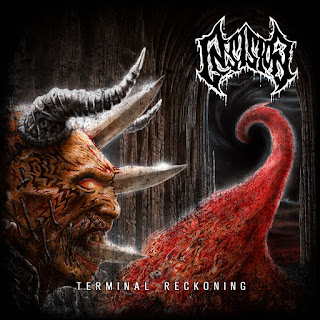 One of the genre’s foremost acts, Swedish brutal death metal legends Insision have been at the scene since the late 90s, but a series of lineup issues has plagued the band’s output in recent years. Finally getting stabilized as Gustav Trodin on bass, Ljusebring Terrorblaster on drums and Adam Ramis on second guitar join holdovers Roger Johansson and Carl Birath to finally issue their fourth full-length after a near-decade gap in releases on January 1, 2016 on Sevared Records.

As would be expected in a band around this long, there’s a wide range of tight, deep churning riff-work to be found here as the band manages to get through the paces quite nicely. The swirling lead rhythms and frantic, blasting drumming on display keep this charging forward at quite steady paces which  is given even more to work with as that allows the riffing to dredge up the tight arrangements that make for a sterling display of brutality while also managing to develop a more traditional old-school atmosphere in these arrangements that brings out the rather immersive swampy atmosphere to the proceedings. It’s all the better here with the way it manages to add the swampy, old-school atmosphere here to the tight, frantic riff-work buzzing along to the varied tempos as that helps out in the brutality stakes as well with the songs shifting nicely between the frenzied, faster tempos as well as the slower, more mid-tempo charges that are alternated throughout here with plenty of rather impressive rhythms that give this one a great balance. Even the old-school-style soloing is nicely on point here and generates a fiery, dynamic atmosphere that as well comes off with a type of melodic air against the tightly-wound, deep churning riff-work elsewhere on display that they really stand out in contrast, which is another nice touch on display here. Being that the band has obviously been around for awhile they’re able to generate plenty of proficiently-crafted rhythms and patterns here, but it does manage to come off as somewhat perfunctory, as though the band is simply going through the motions in their playbook and hitting them expertly but don’t really generate any original moves with them. It’s all quite apparent where they’re going and it does strike up a small note against this one, but it’s all that really hurts it overall.

Despite not really coming through with any kind of truly original work here, the fact that the bands’ experience and professionalism manages to overcome that with a slew of utterly enjoyable, varied tracks that do have many common elements in play here manages to make this a wholly worthwhile addition for fans of the bands’ past efforts or just fans of brutal old-school death metal.

Does it sound good? Order it from here:
http://insision.bigcartel.com/product/terminal-reckoning-full-length-cd-2016
Posted by slayrrr666 at 10:51 AM