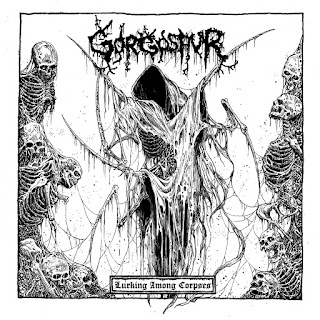 Emerging from the depths of the underground, Swedish death metallers Gorgosaur showcase their love for the old-school with their selected name from an actual creature of the earth’s history. This is more than appropriate on display in their first full-length album, which was released April 25, 2016 on Memento Mori, as this impressive beast rumbles and strikes like a true dinosaurian attack.

From the outset, this here is given the classic Swedish death metal charge that appears so fervently in the country’s acts, and the inclusion of the classic chainsaw-churning groove litters the album from start to finish. This display of these traditional riffing and frantic full-throttle rhythms that allows them to move forward at the typical tempos and still generate the kind of effective atmosphere typically associated here. This attack lets it to delve deep into the rather frantic display of attacks from the old-school wave where the charging riffing and dynamic drumming were all at the forefront of the style found there, and it brings this out in raw form here. The problem here is that the album is indeed too raw for it’s own good, with the short, blitzkrieg-style found here not really allowing it the chance to really get a much more distinctive rise out of these tracks. They’re just so familiar and tend to run through so many familiar elements that it just reads as yet another old-school Swedish death metal band paying homage to the greats of the past. Granted, a lot of that is perhaps due to the fact that this one just doesn’t really have any kind of time to get this done with the brief track lengths with only a few of these songs breaking the three-minute mark so it’s opportunities to really change that up as the simplicity of the riff-work keeps this so straightforward and to-the-point it doesn’t get to really do much about it. Otherwise, there’s a lot to like overall about this one.

While running into yet another common problem found in so many of these Swedish death metal projects of not being inherently original about itself, there’s still a good deal amount of positives found here to make this a select choice for anyone even remotely appreciative of that particular scene or just old-school death metal in general.

Does it sound good? Order it from here:
https://gorgosaur.bandcamp.com/releases
Posted by slayrrr666 at 2:03 PM