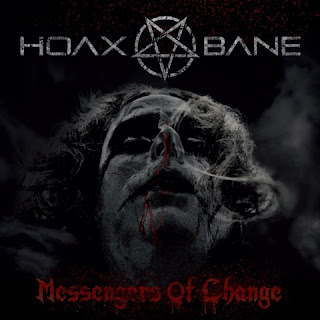 Formed in 2013, German two-man black metal sect Hoaxbane take a socially critical position, hostile towards all manipulative ideologies which seek to achieve a superficial, conformist, consumer society. Hammering out their true vision for the project, the duo’s able to release their full-length debut November 27, 2015 on Mighty Music.

This here is quite an enjoyable and rather surprising debut that manages plenty of great work here with the main focus placed upon the old-school style of swirling tremolo rhythms. Taking the classic sounds of the genre yet displaying a much more prominent melodic framework here, there’s a really appealing balance between the more melody-driven fare and the charging, vicious tones present. Generally employing a fine mixture between a charging up-tempo series of rhythms filled with frenzied riff-work and blasting drumming that carry the explosive patterns along the way while really bringing the sprawling, majestic rhythms that are infused into the tracks which makes for a nice bit of variety that comes into here. While there’s plenty of dynamic, rather explosive amount of work here that this gives the overall album, the fact that there’s a few minor flaws here does give this one a slightly-flawed manner. The main issue here is the album’s use of repetitious rhythms and arrangements which does seem to crop up in a few areas here where it’s based on these same areas coming up again in several tracks. This ends up causing the second half to lose a little bit of steam against the first half with plenty of nice, dynamic work appearing again in the same overall areas and managing to really stick out somewhat. As this is a debut offering, though, it’s not nearly that bad and comes off much better than expected.

With only a few minor elements that hold this one back, there’s a lot more to really like overall here that it really does become quite the enjoyable and highly entertaining effort that manages to give this the kind of appeal for those looking for some really enjoyable and somewhat explosive old-school style black metal.

Does it sound good? Order it from here:
https://targetgroup.lnk.to/Hoaxbane
Posted by slayrrr666 at 11:29 AM