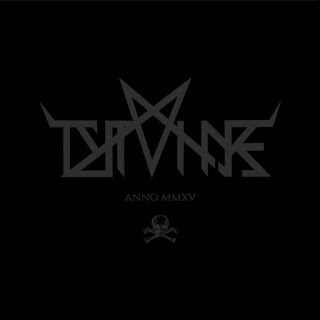 Almost working in reverse in their career, Russian black metallers Teitanfyre initially presented a full-length before moving on to releasing EPs as this one firmly shows. After a three-year break between releases that saw old bassist Kreator departing to be replaced by Roman Rotten, the group’s second EP arrives March 7, 2016 on Inferna Profundus Records.

In league with the rest of their career, this here is mostly simplistic and straightforward traditional black metal played at a slow, lethargic crawl that manages to get kicked up severely once it goes for the jugular with it’s rhythms. Taking this approach is quite a fun time as the material is given a nice chance to set an enjoyable atmosphere before really turning up the savagery with fiery tremolo riff-work and pummeling drumming which usually keep the tracks at a steady pace throughout here once they all get to those particular rhythms. As the material does sway back and forth with the simplistic sprawling sections balancing out the feral, vicious tracks there’s a nice amount of dynamic moods between these sections while providing a nice amount of traditional elements around them. The blend comes off rather nicely here, and it really showcases a lot of nice work in only two tracks with the instrumental outro here that just makes this so brief and over so quick that it really just seems like there’s the need for more work here and at least could’ve had a few other pieces to work with this here. It’s still really the only thing really wrong with this one.

Though it does have some absolutely solid work here involved with the music, there’s just so little actual material here that it really feels so quick and brief which holds this back from what it could’ve been as having more tracks to make it seem even more impressive could’ve made this more than just what it is now as a curiosity piece for fans of the band or the style only.

Does it sound good? Order it from here:
http://infernaprofundusrecords.bandcamp.com/album/anno-mmxv
Posted by slayrrr666 at 6:45 PM