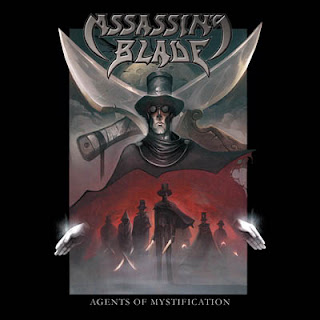 A wholly international act consisting of Canadian and Swedish musicians, heavy metallers Assassin’s Blade was formed in 2014 by Jacques Bélanger of Exciter fame who teamed with a dazzling pair of Swedish musicians, David Stranderud and Peter Svensson. When drummer Marcus Rosenkvist joined the band permanently in 2015 soon thereafter the band unleashed it’s debut offering on April 29, 2016 through Pure Steel Records.

For the most part this here is a fantastically old-school recording, comprising mostly of straightforward heavy metal material clearly in that sphere of influence. Tight, swirling trad-metal workouts are the main course here, running through rather impressive mid-tempo sections here while still allowing the band to switch-up proceedings quite nicely here when it switches over into other creative realms. Also managing to go into far more majestic, mid-range tempos here where it forsakes those tight speed-packed arrangements for more of a plodding mid-tempo series of rhythms that are far more relaxed and instead march along at an even-handed chug with the steady rhythms keeping it all in line. This is on the whole a really appealing arrangement for the most part, even aiding along by the fine guest musicians who provide extravagant and ripping soloing throughout most of the tracks as well as the explosive vocal-work. Indeed, there’s plenty of enjoyable work throughout here, this one does manage to stumble across one problem where the album goes into a dry spell music-wise in the mid-segment. There’s plenty of times in those tracks where it really could’ve turned up the speed more than what happens here, and the majority of those tracks in that section are based on the mid-tempo style of work instead and aside from that drop-off it really reinforces the idea of this one running through the same riffs and patterns. This is a rather troubling section that does come through mainly from the group’s inexperience, and should be remedied in time as they continue.

While there’s some minor flaws to be had here with the somewhat detrimental rhythms running into the same patterns, there’s plenty to like here in the classic heavy metal sound otherwise that it does come off more for that old-school heavy metal crowd or fans of the creative members involved who can look past the flaws.

Does it sound good? Order it from here:
http://www.puresteel-shop.com/ASSASSINS-BLADE-Agents-of-Mystification
Posted by slayrrr666 at 1:05 PM