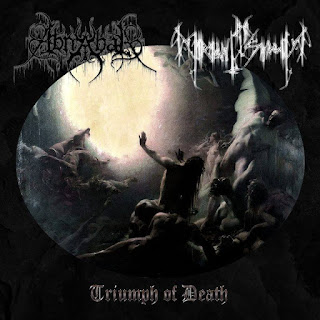 One of the more unusual splits to be found, this split release between Finnish black metallers Mormânt de Snagov and Moroccan one-man black metal project Abnabak is quite a distinct location-based effort. Initially released as a limited CD run through Cold Raw Records on November 20, 2015 with only 120 hand-numbered copies being produced, each band brings two original tracks and a cover for a total of six tracks of music.

First up is the Moroccan Abnabak, whose one-man attack tends to be straight and simple worship of the second-wave Norwegian acts. Built around the swirling and frantic tremolo-picked riff-work and dynamic blasts wrapped around a raw, gravelly edge there’s little reason to believe this is actually a northern African band instead of a more traditionally-located country such is the competence of their attack. Able to generate the same overall mixture here with the sweeping full-throttle tempos and the sprawling mid-range atmosphere-filled melodies that are rampant in that overall section of the world, this here is a truly worthy old-school black metal attack. The closeness of the attack here should give away that they’re not the most original act out there but it’s certainly not a diminishing factor against them and works to the band’s advantage at times with their conviction but some might take offence to this overt and mindless aping of the classic sound. Still, they deliver some solid tracks here and score rather well.

The second band, Finland’s Mormânt De Snagov whose name is in Romanian which means “Grave of Snagov” after a city from Romania, is a more experienced act and it shows here. Though again firmly rooted in the old-school Norwegian style with the tremolo-picked rhythms and overall rather dynamic charges through the differing tempos throughout here, the fact that they’re able to maintain a lot more variance in their rhythms and riff-work which manages to make for a lot more intense and impressive actions within their arrangements alongside the blistering attack at the forefront of the band's sound. There’s not a whole lot really wrong with this band’s side of the split, though it’s actually the kind of tracks they provide here as they only manage one original effort alongside a re-recorded effort and the cover track, and there’s the need for more original work here after what the other side provided. Otherwise, this one was quite an impressive attack.

There’s not a whole lot really wrong with either bands on this release and overall both manage to come off rather well in terms of setting themselves up to be introduced to audiences and manages to get into the appeal of those who prefer competent and overall enjoyable second-wave black metal worshippers.

Does it sound good? Order it from here:
http://mormantdesnagov.com/merch.html
Posted by slayrrr666 at 3:26 PM