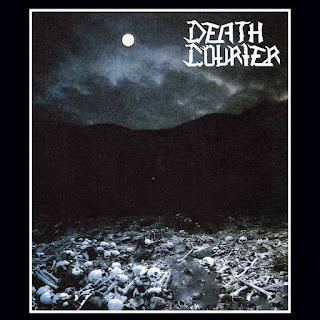 At the time of it’s release, Greek thrash/death metallers Death Courier were among the few acts in the country that weren’t paying homage to the exploding Scandinavian black metal scene, and originally split up in 1993 almost immediately after this release. Having reformed in 2009 with a new line-up and a second album already released, their full-length debut is now reissued August 15, 2016 on Nuclear War Now! Productions after an initial release in 1992 on Psychosis Records.

There’s a lot to rather like about this release, which starts up-front with the dynamic riff-work. This is rather impressive as the tight, deep-churning riffing is given a wide-berth on the release, managing to utilize either the galloping up-tempo thrash patterns or a slower, churning sprawl that takes the path of death metal acts from that time-period, it’s quite a variance on display that’s more than adept at merging these two styles together as the genres were still blurred in this period yet are still quite prominently featured here. That kind of overtly obvious display makes the material appear even more obvious here with the frantic thrash riffing generating the kind of up-tempo, chaos-riddled madness alongside the utterly furious blasting drumming which is all quite impressively handled while also managing to drop the chaos in favor of a slower, lurching crawl that favors the heavier end of the spectrum. Being able to accomplish all this while being able to feature tight, shortened tracks here is a great feat as well that further makes for a great time here as it manages to get a lot of variety and impact out of a shortened running time, almost contradictory to most other bands who can’t master that kind of variance and dynamics in tracks nearly double the length of some of these. Some of the chaotic material might seem schizophrenic and disjointed to some, but the maturity and prowess demonstrated leaves some rather impressive work featured here.

Despite a case where it does seem to cram too much into itself for it’s own good,that’s a rather nagging and barely worthwhile element to be found here with this one as it’s one of the more clear-cut and enjoyable examples of the styles in the genre and is wholly recommended to all fans of that particular style or just ravenous, vicious thrash in general.

Does it sound good? Order the re-issue from here:
http://nuclearwarnowproductions.bandcamp.com/album/demise
Posted by slayrrr666 at 3:14 PM