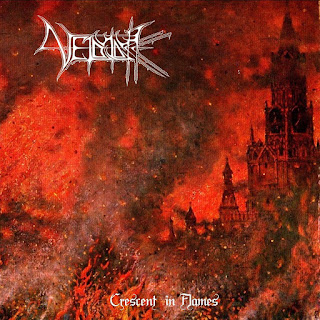 Continuing to walk through the underground, Wisconsin-based black metallers Veldlokk have been at the game for a while now since their 2003 formation and that decade-plus experience has honed their craft significantly. Released March 30, 2016 on the band’s own Sworn Malice Productions, this sixth release features some of the trios best work yet.

As has been the bands’ style from the beginning, there’s a decidedly old-school bent to the material here as there’s a rather impactful and dynamic series of tremolo-picked rhythms which follow suit of the old-school style. Galloping along at quite up-tempo measures and given a rather enjoyable boost here with the varied tempos where it rages along at a fast, frantic set with plenty of ravenous, swirling tempos keeping the energy up with the ferocious, blasting drumming, to a more generous mid-tempo charge which is favored far more often here as there’s a far greater preponderance for the steady, marching rhythms and buzzing tremolo patterns here while given a slight boost with a few slower, sluggish tempos sprinkled around throughout the album. This work overall gives the album a great sense of dynamics and variety that’s quite appealing and generally quite worthwhile for the most part, though it does tend to bring up the all-around important issue here in that by playing that style of music here it doesn’t really generate much in the way of overall originality by once again going for a mostly familiar attack and not really doing much to differentiate themselves from the pack. Being yet another band with a raw, gravelly old-school sound, dynamic tremolo riff-work and varied tempos and pacing makes for a pretty common style of attack throughout here and it does seem to get somewhat tiresome with it repeating itself here.

Despite being plagued by unoriginality, this isn’t so much of a detrimental crime here as rather it places them as a rather enjoyable face in that particular cog encompassing the underground and makes this a solid, erstwhile choice for those looking for more traditional black metal or those who appreciate the American take on the style.

Does it sound good? Get it for free here:
http://veldlokk.bandcamp.com/
Posted by slayrrr666 at 2:34 PM