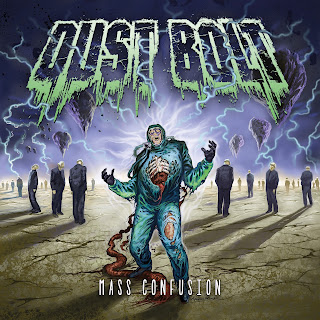 From the outset, German thrashers Dust Bolt have been all about worshipping the old-school Bay Area thrash scene, and have from the start utilized that form of attack to create their signature style. Released July 8, 2016 from Napalm Records, this is yet another in the band’s fast-growing brand of hyper-speed old-school thrash worship.

For the most part here that old-school thrash assault is the main basis for their music. The tight, choppy mid-tempo rhythms and utterly blistering full-throttle thrash sections fired by the sort of manic rhythms that were featured prominently in the Bay-Area school causes the vast majority of the album comes off with the sort of ripping attitude that was evocative of that movement. As well, those choppy mid-tempo sections balance out the aggression and intensity by acting as natural buffer-sections against the more raging, blistering sections featured throughout here, and the whole exercise is given a suitably competent old-school sheen. This is neither technical enough or varied enough to really stand-out and be all that original, though, which tends to be the main running theme with bands in that style which is again repeated here. This is the sort of band that really only takes a few tracks to make the impression of whether or not they’re worthwhile as they’re so blatantly and fervently old-school that it can reek of plagiarism at times rather than being part of their own identity, but on the whole it’s competence is what really holds it up.

Much like the majority of bands in their style, this isn’t the most original band in the genre but are certainly one of the more energetic and intense which certainly helps this one out tremendously in that it will undoubtedly appeal to ravenous revivalists looking for more or other thrash aficionados who can overlook their flaws and idolize their positives.

Does it sound good? Order it from here:
http://www.napalmrecordsamerica.com/store/dustbolt
Posted by slayrrr666 at 9:14 AM