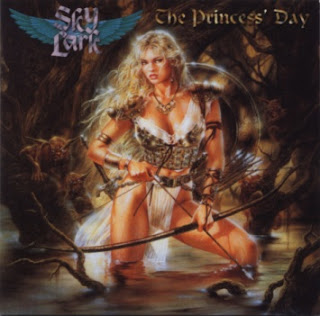 Appearing to have honed their sound down, Italian symphonic metallers Skylark follows up with their patented Italian symphonic metal sound from their previous efforts without much difference here. The fifth full-length album from the group, which sees new drummer Carlos Cantatore join the group, has them dropping their Divine Gates concept for a new story that was originally released November 5, 2001 from Underground Symphony before various reissues by the label.

As this implies, the keyboards are up-front and become the focal point of the whole album with it placed so high in the mix this leads to light, dreary atmospheres over the entire album. Bristling with Neoclassical melodies, dexterous symphonic tones that weave throughout the melodies and sparkling bursts of flowery arrangements, the majority of the keyboard work is all sorts of fun. The Neoclassical melodies at play here with the bombastic nature of the symphonic patterns within the keyboards allows for a rather grand and majestic vibe that plays a big role interjecting melodies along the up-tempo patterns and the blinding double-kick drumming, all of which are part of the bands’ sound. While the album itself is noticeably straightforward, the fact that it is so straightforward and unyielding exposes several flaws. Their set-up of blinding speed and Neoclassical patterns shows the band relying on the same tricks, for the most part played around the same speeds which tend to get pretty familiar-sounding bleeding into each other managing to utilize the same rhythmic patterns over and over again. Nearly all the drum patterns sound the same, the riffing falls into eerily similar patterns and the keyboards strike up the same series of familiar patterns with the constant appearance of the same rhythms and melodies appearing throughout the album as a whole. Beyond this big issue, there’s another rather big one with the incredibly shoddy mix, really doing none of the instruments any favors. The drums are lifeless and hollow complete with irritating typewriter-clicking double-bass runs, the guitars tend to disappear from whole sections in the songs and are so light and airy they get drowned out. These factors are enough to keep this one down but still not to the point of being on the lower end.

Although there’s a lot to really like here about this one, it’s flaws just do hold this one back to the point of madness with the one lone problem featured here which makes this one solely appealing to the most devout and enthusiastic Italian power metal aficionados and fans of flowery power metal while all others should heed extreme caution.


Does it sound good? Order it from here:
http://www.usstore.it/index.php?id_product=108&controller=product&id_lang=1
Posted by slayrrr666 at 11:25 AM