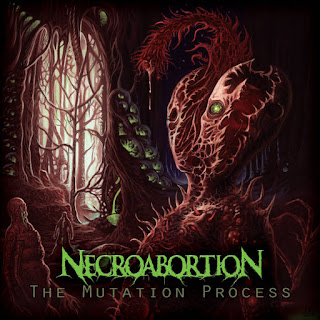 Certainly having their share of lineup issues, Argentine death metallers Necroabortion have really been felled from capitalizing on their debut with these issues and has held them up for nearly a decade. Finally dropping their second guitarist for this release to settle on a devastating three-piece assault and featuring the same ferocious attitude, their new album comes out August 4, 2016 independently.

Despite their South American heritage, it could easily be forgiven for thinking the band hails from Florida circa-1995 such is their chosen attack structure. With tight, technical rhythms running along in frantic patterns that takes a full-on grinding approach to the steady tempos here, and it’s all straight from that particular playbook. Hammering out the technicality in their riff-work yet keeping it all within the realms of what’s needed within the arrangements rather than to showcase how rapidly they can change their riffing patterns keeps this diving along through frenzied patterns and dynamic up-tempo chugging rhythms which offers a nicely varied approach that’s wholly appreciative here with the approach giving this some dynamic crunchy rhythms alongside the frantic blistering blasts that are also offered up with a conviction and energy that’s appealing. It is certainly possible to tell where it’s going in terms of the arrangements, though, as the one main downfall of the band is the fact that they take those rhythms so explicitly that it really doesn’t offer forth a really original vision or approach regardless of the competency of their attack. This is really carried over as well into the album’s rather curious ability to really just end their tracks so suddenly that it’s almost jarring rather than ending naturally and it’s somewhat disarming when being blasting by a ferocious lead or a dynamic blast section only for a sudden end to the music to occur which really places emphasis on that last-played note and it really causes them to stick out even further. Still, to be this good after the layoff and struggle is quite commendable.

Though it does have some minor issues here and there when it comes to really carving out their own niche, sometimes just a competent and enthusiastic approach is enough to lift it up enough to listenability which gives this effort a wide berth of appeal to fervent fanatics of the Floridian approach to death metal or most of the revivalist bands in this style.

Does it sound good? Order it from here:
http://necroabortion.bandcamp.com/
Posted by slayrrr666 at 5:29 PM