Stormtide - Wrath of an Empire 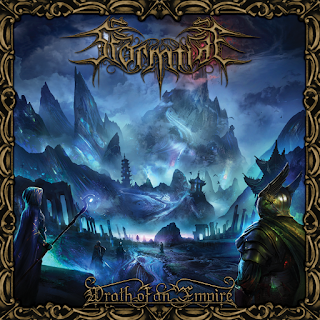 Formed in late 2013, Australian fantasy metallers Stormtide has released a critically acclaimed EP and a highly-lauded single in their wake while touring their homeland consistently as part of various tour support endeavors. Having spent the better part of three years perfecting their debut album with an intricately woven story centering on the adventures of the Warrior, the Prince and the Magician, this is released August 1, 2016 on Metal Hell Records.

As befits the status of the bands’ chosen style, this here comes off as an utterly impressive mixture of impressive symphonics overlaid over the bands’ charging display of melodic death metal underneath it all. Managing to utilize a variety of overtly epic symphonics within their sound, they generate a dynamic and epic soundscape that’s quite impressive and rather energetic as it moves within the tracks featured here which sounds even more engaging while maneuvering through the melodeath rhythms elsewhere here. Though firmly rooted in death metal as the tight rhythms are given a nice place of prominence, the fact that the majority of the riff-work here is given quite a nice series of melodic runs here allows them plenty of time to shimmer in the arrangements which is where this one really scores quite well. It really doesn’t bring out the kind of intensity really required of it, though, as the fact that the majority of the tracks tend to wallow around in a tight, stylish mid-tempo plod that never really works out into the kind of bombastic overkill this fantasy-based music really deserves. The keyboards are given a grandiose sheen that makes them quite fun, but when combined with the group’s penchant for mostly bland mid-tempo rhythms it doesn’t really generate the kind of epic feel that’s certainly hinted at and instead certainly makes the later half here seem just overlong and bland once it’s apparent the band isn’t changing up this style at all. Though there’s some decent moments to be had here, there’s not enough of them in here to really make that much of an impact.

Though it’s certainly not all that bad for a debut offering, as there’s some enjoyable tracks to be found here overall this one just doesn’t really live up to the promise of it’s potential and lacks the impact it could’ve had which instead makes this mostly for those who prefer this sort of fantasy-driven material the most.

Does it sound good? Order it from here:
https://metalhellrecords.bandcamp.com/album/wrath-of-an-empire
Posted by slayrrr666 at 10:46 AM