Skoll - Of Misty Fire We Are 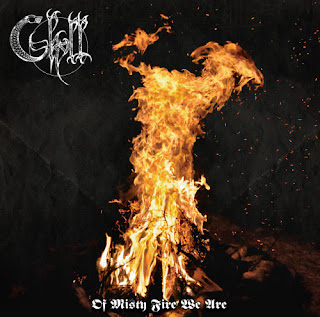 Once more part of their long-standing fascination with nature, Italian viking/pagan black metallers Skoll have continued to weave their influences together into a rather impressive and enjoyable whole. Now that long-time session member Mayhem has become the full-time permanent drummer in the group, they prepare to release their fourth full-length effort February 20, 2016 on Fallen-Angel Productions.

Much like their previous works, this one here manages to evoke quite a bit of mysticism and nature involved in their work where it’s all based on that form of atmospherics. The swirling, majestic tremolo patterns and sprawling tempos makes for a rather strong base upon which the band interjects the sort of pagan instrumentation here in the form of wooden clanging and keyboard work that really maintains a solid interjection of the bands’ paganistic themes while still holding true to the black metal labeling. That gets carried out here with the simplistic tempos filled with galloping rhythms that are given plenty of chances to work through select patterns where it really just lets loose with the frenetic drumming and tighter tremolo riffing which gives these sections a more traditional black metal aesthetic mixed alongside the rather enjoyable pagan attributes. This whole affair is given quite a lively sense of grandeur with the symphonic keyboards blaring over the top of everything and really help to sell the atmospherics of the situation and adding a melodic touch to the whole album, though that does tend to bring up the one minor flaw present here. This one is quite a light album overall with the riffing kept to a rather light tone that adds immensely to the melodic vibe but really fails to make much of an impression once it goes back to the tighter black metal sections due to still maintaining that melodic tone. It’s pretty apparent as the album continues how this works with the somewhat weaker second half really utilizing this to it’s fullest, yet there’s still plenty to like about this one overall regardless.

With plenty of enjoyable elements to be found throughout here and not really much of a flaw present, the group continues to spill out enjoyable and somewhat engaging entries in the genre that really should make them more impactful in the genre and leaves this for fans of the bands’ past work or the particular genre.