Wisdom (Hung) - Rise of the Wise 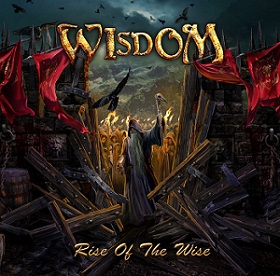 Artist: Wisdom (Hung)
Release Title: Rise of the Wise
Year: 2016
Label: NoiseArt Records
Genre: Power/Heavy Metal
Tracklisting:
1. Over the Wall
2. Ravens' Night
3. My Heart Is Alive
4. Hunting the Night
5. Hero
6. Through the Fire
7. Nightmare of the Seas
8. Believe in Me
9. Secret Life
10. Welcome to My Story
11. Rise of the Wise

Built up as the country’s greatest genre act, Hungarian heavy/power metallers Wisdom are without doubt one of the best genre acts in that part of the world as well as their country’s premier act as well. With Anton Kabanen joining on guitars, the group’s fourth full-length effort released February 26, 2016 on NoiseArt Records firmly showcases this feat with the fact at the top of their game.

This here is such an infectious and utterly enjoyable effort that there’s plenty of enjoyable elements found within this one that really shows off how enjoyable their sound is. The main impetus here is on fiery, bright melodies within the riffing that showcases the dynamic power of melodic power metal while running alongside the tight, thunderous crunch of traditional heavy metal and is made all the better with the album’s infectious energy. That alone here is one of the most impressive elements to be found here as the album stays within this framework for the most part and doesn’t really offer up much deviation at all which is what allows this one to keep the steady pounding rhythms featured here at the forefront as there’s a rather large amount of stylish tempos and arrangements here that come from the deeper rhythm section charging away while the band fires off their melodic power metal firestorm and more uplifting tempos that have a much greater and enjoyable charge throughout here which is what makes the group so lively yet still heavy enough here even on the ballads. At times the bands’ approach drops off unexpectedly into a rather bland mid-tempo chug that sounds completely at odds with the victorious choruses and melodies which cause them to stick out against the much stronger crunchier riff-work that picks up the tempo nicely, but the band is confident enough to leave them in such short bursts that there’s a lot more elements to like here that dominate the album as a whole.

With a few small and relatively minor missteps that don’t really upset the album all that much, this one really does pick out the best parts of the bands’ sound and makes them enjoyable with their dominance on the album that this is surely one of the better entries in their catalog and is wholly recommended not only to fans of the band but of the style as well.

Does it sound good? Order it from here:
http://www.wisdom.hu/webshopeur.php#
Posted by slayrrr666 at 4:10 PM