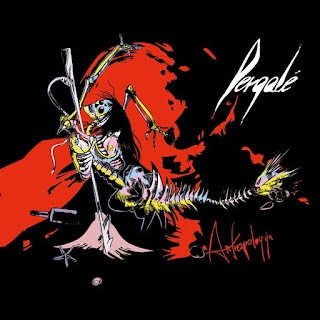 Continuing to spread their mission throughout the underground, Lithuanian depressive black’n’rollers Pergalė showcases a further refining and honing in on their signature upbeat and bright sound. Finally arriving five years after their last effort, this second full-length album was released March 8th, 2016 on Inferna Profundus Records.

As befits their signature sound, the music here is decidedly non-black metal with their bouncy, hard rock-based riff-work that doesn’t really descend into the traditional strains of most black metal bands as the swirling tremolo rhythms are dropped in favor of these particular rhythms. When especially compared against the simplistic, straightforward drumming that really does showcase more of a rocking backbeat here with the simplistic patterns and total lack of blastbeats, this really showcases itself as a truer rock act that does bring in a few occasions of chugging rhythms for heavier accents than would normally be expected which at times is a nice breath of fresh air in the genre. In other times, this mere facet is infact the bands’ greatest weakness as the tracks where it does descend into propulsive drumming and swirling rhythms just sound so out-of-place here that the effect is more jarring than anything and doesn’t really reach any kind of intended effect throughout here as it’s just simply too extreme to really make an impression on the lighter, more bouncy material featured here for the most part. They’re just not featured enough to really get the full impact of their inclusion which just sounds so oddly placed into the tracks without any kind of real build-up that the effect becomes mostly one of confusion as if one they’ve been placed from another band into the track for shock value as it just completely clashes with the jaunty hard rock-inspired beats present here. Likewise, the series of overlong, extended segments where it’s simply ethereal, atmospheric music presented is quite oddly inserted and really doesn’t do much but make the album sound longer than it really is. Even still, the hard part about all this is that the black metal aesthetics and the hard rock elements are both so competently played and performed that this factor here can overcome the other difficulties featured here.

By no means is this a flawless effort, this here is at times such a jarring and schizophrenic effort that it’s nearly impossible to tell what audience is going to find appeal with it due to the extreme of influences presented, though the competency of the effort as a whole makes this worth checking out for adventurous metal fans or those looking for more than just generic extreme metal.

Does it sound good? Order it from here:
http://infernaprofundusrecords.bandcamp.com/album/antropologija
Posted by slayrrr666 at 6:40 PM