Hour of Anguish - Solace of Sorrow 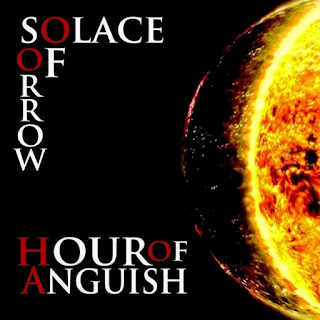 Formed in 2015, the duo of Swedish melodic death metallers Hour of Anguish Andreas Henriksson and Richard Lee have set out to create an intensely brilliant, brutal, and beautiful soundscape that transcends the status quo of melodic death metal. Having quickly set their sights on their debut effort, this power-packed throwback to the genre’s heyday was independently released April 30, 2016.

From the outset this here is quite apparently a throwback release to the heydays of the Gothenburg melodic death metal movement, and all the hallmarks of that particular variation is found here. Swirling along through a series of tightly-wounded, moderately thrash-inspired riff-work that brings along the kind of mostly upbeat and enjoyable style of album that manages to piece together enough melodic rhythms and lead-runs throughout the tracks to give it a solid, heavy backbone while swimming in melodies. As expected, this brand of light-and-dark dichotomy at play here is immensely satisfying with the album remaining heavy enough with the driving, pounding mid-tempo rhythms with plenty of pleasingly-melodic riffing and leads which roots this down in the familiar strains of this scene so adeptly that it’s really hard to really see past how much they ape this. While the more modern production does give this away as for what year this was recorded, everything else here from the riffing patterns and arrangements to the dual hoarse shrieking/clean crooning vocal styles here all comes straight from the genre’s playbook, in the first chapter no less, and that does lose the band’s identity in the sea of copycat acts that utilize this style and approach as well. They might not be at the bottom tier of the style but they’re certainly not among the better variants either, and this does bring the album down somewhat.

Not necessarily the best act in this particular sub-genre, nor are they the worst either as the band does have enough going for it when it really lets their style go that it has plenty of appeal for melodeath fans or the most ardent and devout followers of the Gothenburg tropes, while all others may not find the point here in all the negative points staring them straight in the face.

Does it sound good? Order it from here:
http://www.hourofanguish.com/store/p1/HOUR_OF_ANGUISH_-_SOLACE_OF_SORROW.html
Posted by slayrrr666 at 12:02 PM