Master - An Epiphany of Hate 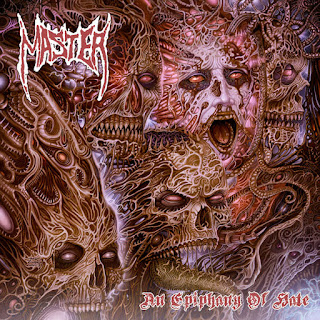 Artist: Master
Release Title: An Epiphany of Hate
Year: 2016
Label: F.D.A. Rekotz
Genre: Death/Thrash Metal
Tracklisting:
1. Subdue the Politician
2. Fiction Soon Becomes Reality
3. Face Your Fear
4. Just Be Yourself
5. Just Take My Right Arm
6. An Epiphany of Hate
7. It's Clearly Eden
8. The People of the Damned
9. Senses All Will Be Controlled
10. Red Alert

One of the genre’s founding figures, Czech Republic-based death/thrashers Master has literally been at the forefront of the style from the very beginning being one of the first bands to ever adopt to the style back in the genre’s infancy. Now, nearly thirty years on from their start and reaching album number twelve, the titans offer forth this crushing release January 29, 2016 on F.D.A. Rekotz.

Much like the majority of their work in the past, this here is a rather blistering and mostly primitive brand of death-infused thrash metal that charges along at a pretty generous pace here. The main basis for the swarming, mid-tempo attack here is given the main charge throughout here which keeps the tracks steady, simplistic and really straightforward as the rhythms buzz along through the tight patterns featured here as the bands’ thrashing energies are what really tend to drive this one forward rather than the riff-work. Since the tracks are generally given a much more explosive pacing that brings out the album’s rather simplistic nature quite well here as the album seems to pick one simplistic pace and then just holds it for the majority of the time here which makes the tracks bounce along when they’re given an up-tempo rhythm to play with yet when it comes to the more sluggish and plodding tempos it doesn’t really generate the same sense of energy with it never really deviating much in it’s patterns and arrangements. There’s some great work to be had when it really lets itself go since those tend to dominate the album, yet the rare occasions where it does drop these slightly is what causes this one to lose it’s steam as the disjointed pacing and tempos is slightly jarring overall here. Thankfully, it’s rare enough to not be that detrimental against the enjoyable remainder of the album as their craftsmanship and consistency allows them to do this better than most other acts in the genre by featuring enough to make it noticeably yet going for the jugular enough times to really make that impact.

As this is clearly a competent and highly professional act that knows what they’re doing, this is nicely displayed here with an album that has a lot to like about it and only a few real downer spots that leaves this a wholehearted recommendation not only for fans of the band as well as those who enjoy this ravenous style of old-school death/thrash metal.