Pit of Carnage - The Rise of the Fallen King 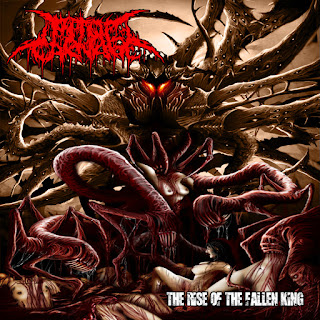 Founded in 2013, Danish brutal death metallers Pit of Carnage came together because of a need to go heavier and more brutal than their previous bands and settled on a two-person line-up of GoreDrummer and Kasper Hansen. When that fizzled following the debut release, GoreDrummer took over all other instruments while bringing Peter Juelsgaard for bass-duties and unleashed this second opus August 3rd, 2016 on CDN Records.

Blasting out with fervent vigor and intense rhythms, the effort really showcases the tight and frantic rhythms that are given plenty of space to drag out the deep, crunchy riff-work. Utilizing thunderous drumming into tight, blasting rhythms along a sea of swirling, somewhat-technical riffing brings along the brutality here through the rather dynamic series of tempos throughout here, going for either the slow, ominous crawl or offering up faster, rabid rhythms that take full advantage of the thunderous pounding and deep-set bass-lines all the while letting the swirling technicality in the riff-work take over here. Charging alongside this fine work is a slower section of plodding atmospheric sprawling chug that’s somewhat at odds with the remaining part of their sound but is still a highly enjoyable aspect here that features some rather tight, crunchy work on display here that helps in the brutality regard even with the stagnant tempos off-setting the much more ferocious work elsewhere here. In essence that itself seems to be the only real downfall of the album is this rather stilted pacing when it drops the faster blasting for the sprawling chug, and once this gets back into those more favorable tempos there’s a lot of great material here that’s quite enjoyable. The decision to split up the two-piece instrumental tracks when it could’ve worked solidly as one is a slightly questionable one, but as for the music it’s not that big of an issue.

Overall this here is quite an enjoyable blast of brutal death metal that definitely gets plenty of its better moments once it really goes for the kill instead of standing back and trying to crush the listener with slower tempos, leaving this one to really appeal mostly to ardent fanatics of European brutal death metal or less discernable death metal fans.

Does it sound good? Order it from here:
http://pitofcarnage.bandcamp.com/
Posted by slayrrr666 at 11:05 AM