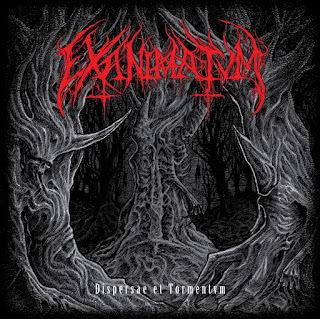 Formed in February 2013, Chilean death metal troupe Exanimatvm have steadily fought their way out of the underground with plenty of attitude and a ferocious concept for their style. With long-time frontman Ivan Barraza gone and bassist Dennis Ferreira taking over vocal duties with the addition of second guitarist Jorge Tréllez filling out their ranks, this debut effort released June 18, 2016 on Dunkelheit Productions shows these guys really understand what’s so special about South American death metal.

Despite the slight roster shake-up, for the most part this here is still a rather enjoyable and really rousing effort that manages to effectively channel and reproduce the rather frantic approach of the old-school death metal sound. Filled with a darkened, raw atmosphere that brings out the type of dirty, murky tone and feel here while ripping along to the steady riffing buzzing along when it’s ripping through the frantic styles or generally carrying along at a steady mid-tempo range that has a rather enjoyably decrepit feel thumping along to the rest of the material. This sludgy, swampy concoction is quite enjoyable with this one really generating the kind of charge through the old-school that really makes for a dynamic approach with the sprawling riff-work and steady rhythms providing the perfect raucous background for that particular brand of stylish homage and revival of the genre. With the competence of their attack out of the question, the fact that this constitutes yet another band in the ever-growing trend of trying to play homage to the past causes this one to stand-out somewhat as the album’s real lone flaw by simply playing a mostly unoriginal brand of music. This particular brand of buzzing, steady style of death metal doesn’t really strike as the most varied type out there and it does leave the band not only playing through the past efforts of the genre but also more recent bands going for this style of old-school worship, and while the band is a lot more competent at it than most this does cause the band to lose themselves into the scene somewhat with this type of attack.

Though there’s a few minor issues to be had with the overall originality and creativeness of the bands’ style, there’s little wrong with the rest of the bands’ attack leaving them to quickly approach the top of this crowded field as this will undoubtedly appeal to any fanatic of old-school death metal or the South American scene in particular.

Does it sound good? Order it from here:
https://dunkelheitprod.bandcamp.com/album/dispersae-et-tormentvm
Posted by slayrrr666 at 3:25 PM