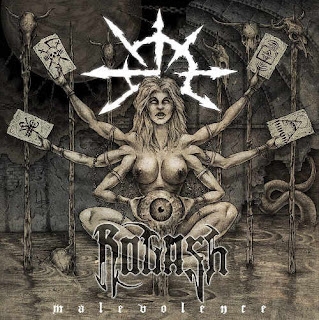 From their start in 2009, German death metallers Rogash have utilized an uncompromising old-school approach and tone for their music which allows it to border several distinct styles quite easily. Now with new bassist Flo and marking the recording debut of drummer Akephaim who joined between releases for a revamped rhythm section, this second full-length is released February 26, 2016 on War Anthem Records.

Much like their previous releases, the primary factor about this one running throughout here is the churning approach to Swedish death metal as there’s a distinct and wholly vicious tone that recalls that scene perfectly. Armed with those swirling melodies and steady tempos, there’s plenty of influence taken there before it gets to the album’s main attack in that ever-familiar mid-tempo chug that brings along the ravenous chainsaw-style riffing that brings along the urgent intensity and feral savagery of those prime-era bands while relying on the rather fine rhythms to carry this one along with a much more varied and focused attack with plenty of blistering drumming and far more utterly ravenous riffing that’s far more energetic than the Swedish influences ever developed. That develops a rather appealing off-the-rails intensity that brings out the deeper, churning Swedish-style rhythms quite well as the variance between the deep chugging and the rapid-fire intensity makes for a charging, dynamic effort for the most part. This here give this one a ton of positives, and a fairly obvious minor detriment in this one being so intent on running through the old-school rhythms and riffing patterns that it really tends to come off as too much of a plagiarism of that style and results in overly-familiar tracks due to utilizing so many of the same mid-tempo chugs and then blasting through the savage tracks without really attempting anything new. Likewise, the cover track at the end seems out-of-place and doesn’t really serve much of a purpose as the pacing is off and just doesn’t sound like something originally written by the band as they’re far more technically-sound than the simplistic thrash of the original. Still, it’s a mostly fun album.

Though there’s a lot of positives on display here, the fact that this one really does seem to drag itself through the old-school as often as it does with the type of life-less rhythms it displays does make it seem like a rather decent-though-enjoyable effort that will undoubtedly appeal to fans of these styles as well as those who salivate over modern death metal acts.