Dark Haunters - To Persevere is Diabolical 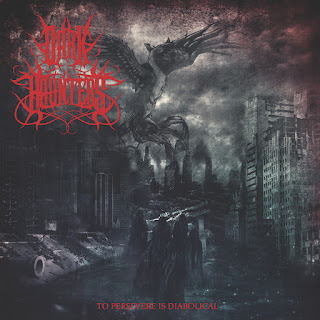 Artist: Dark Haunters
Release Title: To Persevere is Diabolical
Year: 2016
Label: Revalve Records
Genre: Symphonic Black/Death Metal
Tracklisting:
1. In Perseverance...
2. The Burning Eyes of Vengeance
3. Legend of Pai Mei
4. Blood Wolfen Hunger
5. In My Fortress
6. The Tigress & the Prophecy
7. Rising Through the Curse
8. ...Towards the Realm

Born in Atri in 1999, Italian symphonic black/death metallers Dark Haunters initially came together with the intention of playing a gothic black metal with a symphonic classical designs before settling on a more cohesive symphonic design. After years of lineup struggles and numerous concert appearances honing their craft to perfection, the sextet finally unleashes their full-length debut May 5, 2016 on Revalve Records.

What becomes immediately apparent throughout here is the band’s competence and impactful attack, which takes a large dose of inspiration from the symphonic scene with the omnipresent and impactful keyboards that are featured alongside the raging music here. Bouncing along through the music with a cinematic style of accents washing over the blackened soundtrack underneath which manages to merge the raging tremolo-styled rhythms leading along through the deeper, heavy-hitting chugging that comes off as the finest combination of these styles. The riff-work is tight and technical to match the blasting drumming hammering away in the attack, and there’s a nice, heavy-handed sense of fury and intensity in the tracks which makes for a rather immersive symphonic attack within the music, especially when the band fires off into the higher intensity levels. It’s mostly when the band drops down slightly when it stumbles slightly as the group’s tendency towards the slightly sluggish, plodding paces tend to show off it’s rather troubling natures as the riffing isn’t that lively and the symphonics get muted when it’s galloping along, leaving it to feel a little lighter and less dynamic where this appears more often in the second half of the album which does leave it ending on a slightly down-beat ending. As well, this general style doesn’t really leave the band open to explore much in terms of variety causing it to stick to the same general well of attacks for the majority of the time so it can tend to wear itself out through some familiar work at times. Otherwise, this one really does get some enjoyable times in here.

Though it’s not necessarily the most original or consistent act in the scene, this is a solid debut effort that initializes them into the scene in a rather appealing way that at the very least will get those into symphonic black metal to check them out though those who prefer the more traditional works won’t be as impressed.

Does it sound good? Order it from here:
http://revalverecords.bigcartel.com/product/dark-haunters-to-persevere-is-diabolical
Posted by slayrrr666 at 10:38 AM