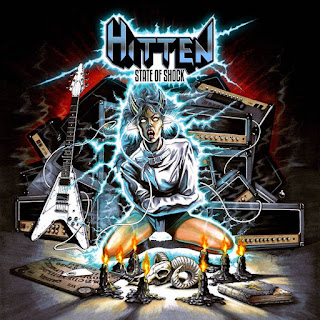 Coming together in 2011, Spanish traditional heavy metallers Hitten have wasted little time building a discography that pays tribute and worship to the greats of the genre’s past with their first releases issued within a calendar year of formation. With a solid lineup focusing on delivering classic metal formulas, the group releases their second full-length album March 1, 2016 on No Remorse Records.

Right from the start this one here is so overtly and unashamedly old-school that it’s impossible to tell that love blazes through their music as it simply unleashes a cavalcade of classic heavy metal workouts into their music. Focusing on charging dual speed-metal rhythms that bring about a rather impressive and dynamic energy to the music with the full-throttle charge featured working nicely together with the furious crunchy riff-work. This blend of old-school influences is great at perfecting this atmosphere where it’s able to generate fiery, full-throttle ragers dripping with classic speed metal patterns and a furious crunch to go hand-in-hand with the album’s more epic, restrained mid-tempo attitudes that are quite well measured against these more fiery and frenetic rhythms which produces a compelling balance between the two genres. While it’s one thing to be able to hit that kind of energy and attitude, the fact this is accomplished with the whole production taking on that kind of approach is quite another with this one really driving forward in that kind of attitude and infectious energy that conjures up the tone and atmosphere found in the old-school which is what does knock this one down somewhat as the album is such a hugely influenced throwback that it really doesn’t do much of anything truly original or creative. Instead, it relies far more on it’s engaging spirit and infectious playing to win over the listener, and while that works incredibly consistently the fact that not enough of it is really unique or creative does allow this one to slip slightly even though that infectiousness is what makes it so fun.

This is clearly one of the more impressive and enjoyable groups in this particular style and manages to get so much right here that it’s set of minor flaws are so kept in check that there’s much more to like here as this one is perfectly suited for any fan of the old-school metal sound or the revivalist bands using that style.

Does it sound good? Order it from here:
https://hittenheavymetal.bandcamp.com/
Posted by slayrrr666 at 12:34 PM