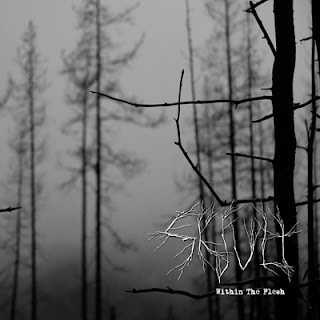 Artist: Skjult
Release Title: Within the Flesh
Year: 2016
Label: Cvlminis
Genre: Raw Black Metal
Tracklisting:
1. Within the Flesh
2. Death Has Reached the Skies
3. 7th Vision
4. I Serve...
5. As I Walk Among the Flames
6. In a World ov Gall and Blood
7. Last Requiem

From the city of La Habana, Cuban black metallers Skjult operate as a one-man band of one named Conspirator who founded the project in 2015 and has since quickly ushered this debut offering. Initially an independent release February 11, 2016 before a Cvlminis re-issue April 6th digitally and then a CD-pressing on April 25, 2016, this blistering assault features a nicely defined raw, undeveloped style of black metal.

Though the album might be quite raw and of the undercooked style, on the whole there’s still a lot to really like here. The fact that the guitar riffing is based around a deep, churning series of rhythms is where the band absolutely shines with this one producing a rather simplistic yet highly infectious monotonous tone in their work with both the mid-tempo paces and the faster more chaotic gallops working nicely with together here with that riff-work to generate some rather atmospheric passages. The low, droning buzz accompanying these riffs is suitably appropriate and grim, managing a fine feat in creating such a perfectly-honed and crafted setting that it’s nearly impossible to create that kind of dark atmosphere elsewhere as the raw, gravely production on the album actually accentuates the work to perfect heights and gets the most mileage out of the rhythms by drowning all the repetition and simple riffing in a blanket haze that’s imminently enjoyable and immersive. While this works nicely for the guitars, the production here does hamper other instruments here with the bass being nearly non-existent and the drumming carrying a messy tone that sounds akin to pounding away on cardboard boxes regardless of it roaring out of the gates at full-throttle or marching along to the droning mid-paced efforts. Now, some leeway is given here in that regard not only for this being a debut effort but also considering the country of origin which isn’t exactly a hotbed that would allow access to top-notch recording areas anyway so that is forgiven somewhat, yet still the blink-and-it’s-over mentality isn’t as much due to the album’s quick running time really just ending once it gets going. This here is a case where another track or two to help lengthen the record would’ve done wonders as it just seems a little short, but still there’s a lot to like here.

Though this one does have some problems, some of it out of the bands’ hands and some of it they’re fully capable of fixing, the fact that this one does have so much to really like about it makes this a fine choice for those aficionados of the raw, undercooked style of black metal or those looking at the band’s homeland as a curiosity feature.


Does it sound good? Order it from here:
https://cvlminis.bandcamp.com/album/within-the-flesh
Posted by slayrrr666 at 1:09 PM