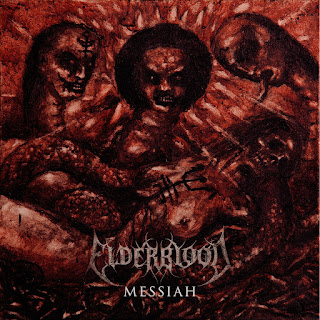 Founded in 2011 by frontman and guitarist Astargh, Ukrainian symphonic black metal upstarts Elderblood are certainly the most important band in that style from their home country. With new member Blodorn joining in on bass and a new label to spearhead their attack, this impressive second release is issued May 27, 2016 on Osmose Productions surely cements their growing status in the underground.

As is to be expected in bands of this style, the main focus here is on the symphonic display which is one of the more impactful and devastating found here. Bombastic, majestic and grandiose to the point of overkill, there’s so much dynamics in the onslaught of keyboard-work featured here that it generates a successful cinematic-score like feeling throughout here that truly sounds as massive as possible with it dominating the mix firing away impressive technical flurries or simple accents to further that cinematic connection. Even without that present there’s some absolutely killer work here as the band can drop the symphonics and present more traditional arrangements with a tight, frantic series of riff-work with swirling tremolo lead-work that’s incredibly heavy while packing a powerful punch and then letting the symphonic work act as melodic accents to the tracks which is just as impressive. This even manages to correct the last flaw from the previous effort in chopping off several tracks so it’s not so bloated and overlong, clocking in at a more respectable length with about half the tracks featured on this release which is another stand-out part of the album as the impact here is just as great while not overstaying it’s welcome and really makes the release a wholly ferocious and devastating effort. Some might find fault with the bands’ over-the-top keyboard theatrics and wish that they played it a little more straightforward considering they’re that good as they are in that format, but this is still a nitpicky and barely worthwhile flaw that still does need to be mentioned anyway as the album really does deliver.

On the whole this is a near-flawless release that really should put the band up into the upper echelon of the genre as there’s so much at work here that’s truly enjoyable as well as devastating that it really should be picked up by anyone into the genre while symphonic fanatics who haven’t found this group yet should be shamed for waiting so long to do so.


Does it sound good? Order it from here:
http://osmoseproductions.bandcamp.com/album/messiah
Posted by slayrrr666 at 12:37 PM