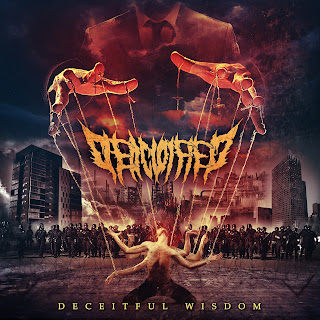 Formed in 2014, Greek death metal newcomers Deacidified come together by the three Sven brothers Vaios, George and Sven who form the vocal, bass and guitar positions in the band with Sakis Spiropoulos on drums. Finally preparing to release their debut full-length, the effort is independently released March 18, 2016.

For the most part the band here manages to display a rather dynamic impression of simple, straightforward death metal as the group here is plainly adept at doling out generous rhythms within their tracks. With simple-minded, tight riff-work at the forefront of the album, this here is wrapped around a determined charge that manage to feature some tight, fervent riffing that does generate plenty of intensity within the tracks as it maneuvers around the album’s mostly mid-tempo paces. It manages to whip up plenty of tight, churning rhythms as well when it breaks free and decides to up the ante on the faster rhythms when it does decide on generating even more speed and intensity here for the rhythms that manages to bring out some more intense arrangements. However, this also manages to bring out the album’s main flaw in that there’s just a never-ending series of wholly simplistic, one-note tracks here that it seems like a major accomplishment to have the tempo get changed up some. It seems to simply pick one pattern or rhythm and keep them there until it’s concluded and there’s little about the tracks overall that really change much as when there is some deviation it’s usually to interject a sprawling, atmospheric section into the tracks which just aren’t that interesting as the remaining music isn’t dynamic enough to warrant that kind of variation when it’s all pretty similar-sounding to begin with. Of course, the fact that the album doesn’t have the chance to do this with barely three-minute tracks is another big problem, with the songs here not really giving it much of an opportunity to really do that since it seques over into another effort right when it’s finally getting interesting and draining some of the momentum that’s being gained here. This, though, is simply growing pains with their first professional release and should be fixed in the future.

Though it’s obvious from the start that there’s some passion and enthusiasm on display here, the fact that the band doesn’t really have the chance to showcase their true potential either with bland segments or no time to really let their work breathe makes this only for the most devout and forgiving death metal aficionados who collect everything regardless of intent or professionalism.

Does it sound good? Order it from here:
http://deacidified.bandcamp.com/releases
Posted by slayrrr666 at 11:47 AM