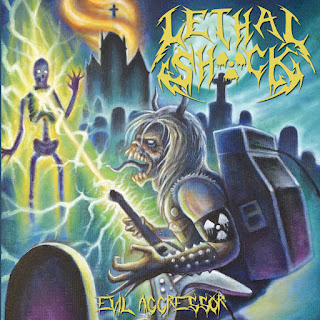 Formed back in 2008, Chicago metallers Lethal Shöck has endured a host a line-up problems that has prevented the band from securing any kind of real output until their debut EP just last year. With the amalgamation of Steve Beaudeth and Justin Fernal into the lineup alongside leader Patrick Shöck, the band produced their crushing debut album on July 22nd, 2016, released by Witches Brew.

Offering up plenty of attitude and old-school influence, there’s a rather enjoyable amount of work to be had here as this one manages to employ plenty of high-speed punk-influenced speed metal patterns into their attack. This simplicity and generally tightly-wound rhythm section here allows this one to fly through rather nicely here with their up-tempo attacks and rather straightforward approach that evokes the rumbling patterns found in the trad-metal attacks of the past. Though simplistic, there’s a great deal of fun to had with their relentless energy and charging drive that erupts due to the up-tempo work found throughout here, keeping the tracks firmly in the ravenous off-the-rails intensity favored by the speed-metal assault while also making for a great balance once it goes into their solo sections which features some more traditional metal rhythms as they still manage to engage with some strong tempos and rhythms featured here for an overall impressive attack. Though this is the case here, the bands’ simplistic approach does work against them especially in the case where it’s juvenile attitude is concerned here which is a somewhat problematic course when this one really gets going as it’s sometimes tough to really figure out whether or not the band is serious. The hard-hitting approach certainly favors the serious side yet their overall attitude does make it seem questionable at times and this might work against them, especially when taking into consideration the overall shorter length and brief song-lengths that further this conundrum quite heartily. Otherwise, this one has some solid parts to it.

As it’s somewhat hard to get a gauge on whether or not the bands’ seriousness is really apparent in here, it’s a problem that does hinder this one somewhat even though the rest of the album has more than enough going for it to really make an impression for fans of high-energy speed metal or traditional metal as well.

Does it sound good? Order it from here:
http://lethalshock.bandcamp.com/releases
Posted by slayrrr666 at 3:59 PM