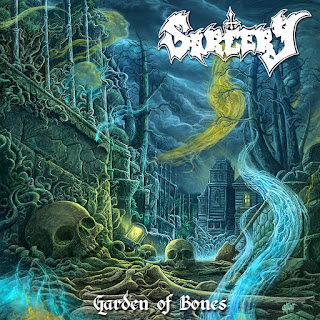 One of the most legendary names in the Swedish death metal scene, Sorcery was one of the original instigators of the style with the earliest output coming in 1987 and issuing their debut several years later before splitting up in the late 90s. Now onto their second bone-crushing release since their reformation and third overall, the heavyweights continue on with their brand of full-throttle Swedish-flavored assault released May 15, 2016 on Xtreem Music.

Being a Swedish death metal group, it’s quite apparent from the on-set what this is about and what’s featured here. This here is prime-era early-90s death metal straight from Stockholm, featuring that distinctive churning riffing style complete with plenty of raging grooves in these mostly up-tempo numbers. Filled with plenty of raging swirling rhythms rather than the grinding buzzsaw patterns, it captures more of a darkened US style but the main element keeping this rooted in the Swedish scene is the simplistic, straightforward rhythm-section that maintains a distinctly charging Swedish-style template that’s featured throughout here which gives this a rather dark, heavy atmosphere to go along with the fantastic riff-work carrying this along as well. This here is essentially so good at this style of death metal that there’s a rather over-familiar tone and feel running throughout this one, in that it’s probably way too similar to numerous other death metal acts in the Swedish scene for it’s own good and comes off as another cog in the machine. That does crop up here in the numerous rhythms running along throughout here that tend to run together with only a select few riffs possible in the genre, but it’s a minor flaw in an otherwise enjoyable release.

Though it runs into trouble only slightly with the type of release featured here being somewhat similar and overly-reliable riffing that doesn’t really deviate much from the norm, it’s still enjoyable enough to really appeal here to fans of the Swedish school of death metal or just devout old-school death aficionados regardless of genre.

Does it sound good? Order it from here:
http://xtreemmusic.bandcamp.com/album/garden-of-bones
Posted by slayrrr666 at 1:04 PM