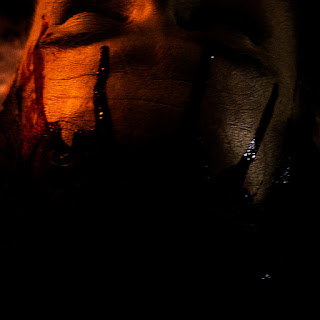 Following their successful second release, Turkish avant-garde/experimental black metal horde Blliigghhtted continue their impressive feats with the third release of the calendar year that captures the improvements made on that last release. Considering their successive productive output, this is quite an achievement as their third overall effort is released December 24, 2015 on Merdümgiriz.

Managing to bridge a deep vein from the esoteric to the chaotic, this here is mostly presented as a sort of nightmarish slough through a wide berth of influences that still retains a mainly black metal aesthetic. With a progressive edge to the material that allows them all to last over the ten minute mark, it manages to tack on discordant, jagged rhythms alongside the nominal swirling tremolo patterns for a seemingly jarring experience long before this one tends to play its trump card along the way in the form of the disparate and seemingly haunting vocals. There’s so little about them that sound human and their low, deep and indecipherable howl borders on the edge of madness as if this is a journey through the labyrinth of the mind of a person tormented with Satanic demons for centuries. It’s perfectly coordinated with the howling racket in the background as the chaotic pounding is synced to complete perfection, and when mixed with the album’s churning progressive edge that runs wild throughout the album it really makes for a really chaotic experience. This is mainly hinted at being the album’s weakest part as well with the utterly discordant and jarring material usually found here would be so extreme that it turns off the listener at it’s first listen. This is so far from conventions and traditional black metal aesthetics that it really might not be an immersive experience as it’s maddening feel could be a detriment instead of drawing them in which is about the only thing really wrong here.

This is quite an appealing and intriguing album that’s got plenty to like about it with its adherence to chaos and inherent madness that really does sink or swim on the tolerance for that kind of aesthetic which instead makes this one seem wholly appropriate for fans of the bands’ previous works and the sublime extremity present only.

Does it sound good? Order it from here:
https://blliigghhtted.bandcamp.com/album/kosmoskampf
Posted by slayrrr666 at 4:21 PM