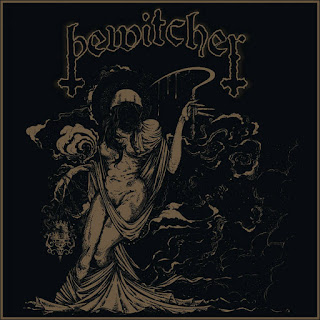 Initially forming in 2013, Oregon black/speed metallers Bewitcher have quickly set about to hone their darkened, old-school approach to black and speed metal over the years. Now that they’ve become a lethal, vicious force, the trio prepares it’s debut effort originally issued as a vinyl release August 18, 2016 on Diabolic Might Records with a CD version on Divebomb Records to come September 9, 2016.

Immediately from the start, this one impresses upon us the old-school feel to be discharged throughout here which fully encompases the rowdy, up-tempo riffing. Utilizing the fiery, frantic riff-work of speed metal in conjunction with the tremolo-based patterns of black metal it creates a truly ripping and explosive mixture here where it manages to incorporate the raucous and energetic style of speed metal thrashing along throughout the tracks with plenty of high-speed precision and tight patterns that generate the reckless out-of-control nature of the style. The wild, raw energy that brings here is married nicely with the ferocious black metal aesthetic where the tremolo patterns and steady, swirling tempos creates a highly enjoyable and rousing style of evil old-school sounding speed metal. Though it’s quite competent and proficiently played, the tight riff-work here doesn’t really generate much variety in the rhythm section here as the deep, raging rhythms displayed aren’t all that different from the type of material featured elsewhere on here where it just tends to run through the same thing over and over again which doesn’t really give this much of an identity here within the music with it really just tending to come off as the type of rousing-but-formulaic approach that really lets the second half sink into a mire of familiar-sounding rhythms and tempos that don’t really differentiate themselves all that much. Likewise, the gravelly hard-rock inspired vocals aren’t exactly that appealing and tend to come off in a whiny pitch compared to the rest of the music and takes some getting used to even if it does eventually come off fine. Beyond these issues, there’s not a whole lot really to dislike about this one.

Though there’s plenty of enjoyable elements to be found here, the fact that this one really does manage to feature some minor, and in some cases barely detrimental issues does make this a solid and really recommended variation for those that enjoy this rocking brand of black/speed metal or those that enjoy the faster, thrashier end of black metal.

Does it sound good? Order it from here:
https://bewitcher.bandcamp.com/album/bewitcher
Posted by slayrrr666 at 3:05 PM