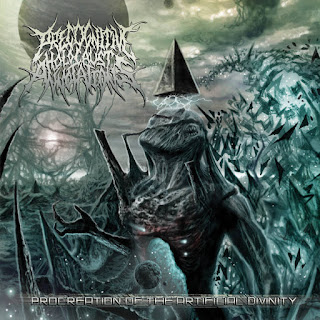 For a debut offering there’s a surprising amount of maturity found here which infact comes from the strong riffing at the album’s core. Littered with tight, impossibly-blistering deep groove patterns this is a fine display of brutality that’s wholly immersive and mechanical-sounding that generates the slow, lurching sound of the genre impossibly well as it lurches from the slow breakdowns to the mid-tempo chug and then wrapping it all in a slice of blistering drum-work. These slightly technical rhythms are boosted along by the albums’ rather decently composed slams that take on a rather impressive amount of slams brought into play here which really work quite nicely here in giving this the kind of full-on brutal onslaught that focuses on the tight, churning rhythms and dragged-out paces of these tracks. That does highlight the fact that this one just doesn’t really have all that much to really work with here with it being so short to the point of almost being an EP release as the barely-two-minute running time of everything here really gives this a short, frenzied pace of barely managing to get anything accomplished here as this one just moves on to it’s next destructive mission. This one probably could’ve used a little more to stand-out here, as this one simply begs for more with the utterly impressive and dynamic work featured here, yet overall it’s still got plenty to like here.

A rare case where this one really could’ve used even more to work with here as the impact is just over way too quickly to let anything positive come from it and instead really lets the positives work for the few who really enjoy their slamming-style brutality or just straight-up brutal death metal aficionados.