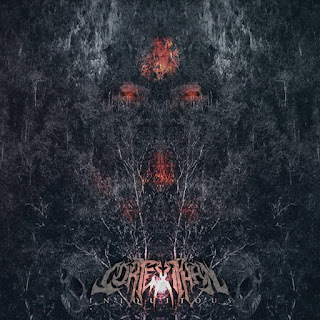 Formed in November 2012, internet-based technical death metal band Cortexiphan has used it’s international leanings to bring together members from the US and Italy all the way to Malaysia. After a slight roster shake-up following their first EP release, new member Andrew Patterson takes over on vocals for the groups’ full-length debut released independently August 12, 2016.

Despite the wide-ranging locales of it’s members, the most surprising element present here is the band’s effortless tight, driving chug rhythms and riff-work. This is a more modern-sounding drive that tends to employ the chugging as the main driving force, relegating this to a dense, heavy charge that simply envelops the listener in a series of ferocious sweeping riffing that employs technically-challenging rhythms that spend a vast majority of the time on the faster tempos which highlights the technicality even further. Bristling with clean rhythms and a ravenous charge that’s highly infectious because of the complex arrangements, given life by the rather clean feel that simply envelops this one in a wholly intense blend of scathing chug rhythms and ferocious driving technicality causing this to really live up to the chosen style at play here which is especially impressive given the amount of time this one drives forward in its pacing. That ends up being the main element holding this one back, as the ever-present speed and driving rhythms here tend to create a series of shorter, blistering tracks that seem to be over before it really begins. Instead of creating a framework for the tracks as a whole, this one instead simply goes for the non-stop attack battering the listener with it’s drumming and rhythms yet never really does anything to let the arrangements breathe and lets them simply drown in their whiz-bang speeds. It all starts to bleed together into unrecognizability as the few select moments where it gets to slow down and interject a melodic solo stick out against the jam-packed arrangements elsewhere throughout here. Had this been given a little more room to work with instead of cramming everything to a shortened space, this would be a lot more impressive than it already is.

Though it has a few minor hiccups here and there where it tends to really rush it’s way through things instead of letting it breathe for a few extra seconds and score some more points in it’s favor, the fact that this is as cohesive and enjoyable as it is is a strong testament to it’s quality and should be given a strong consideration for all fans of the style.

Does it sound good? Order it from here:
https://cortexiphan.bandcamp.com/
Posted by slayrrr666 at 5:39 PM