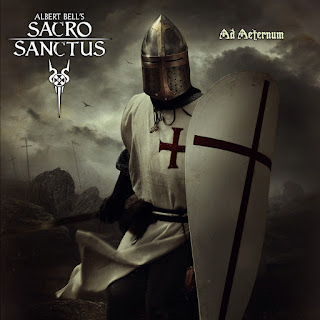 One of the scene’s most important figure-heads, Malta-based artist Albert Bell’s solo project Sacro Sanctus has continued on a much more blackened doom style than his other works in the scene. Picking up from the last album charting the Last Crusades, the Templars' discovery of ancient hermetic texts, their persecution and executions, the curse of de Molay and the infiltration into secret societies by the surviving ones this second album was released April 29, 2016 on Metal-on-Metal Records.

From the very beginning, this continues to explore the fuzz-laden origins of doom metal with the lashings of traditional metal which leaves this with an enjoyable and dynamic old-school approach. The predominance of the churning, fuzzy doom sloughing through the rhythms here keeps this one for the most part running along at quite a lapse pace with the generally simplistic rhythms holding this one into the nearly perfect setting to keep the rumbling riff-work up-front and dominating the release while they run through the kind of general variances of plodding, sluggish patterns in the heavier end of traditional heavy/doom metal to slightly more up-tempo varieties that recall the kind of swirling black metal leads mixed into the procedings that gives this a more extreme edge than expected. Though that doesn’t necessarily get added into here quite as often as expected, it still gets in enough to off-set the predominate plodding rhythms here that does manage to drag this down slightly with those sprawling, sluggish doom crawls making the music quite down-beat and really lacking in energy. Though it does have the kind of bouncy rhythms here that do keep this listenable with the inclusion of a more traditional heavy metal background instead of a doom background, it does manage to keep this from really going where it could’ve had this been given a slightly more up-tempo backbeat.

Though it does come with a minor problem with it’s generally sluggish tempos, there’s still enough to really like about this one that it becomes rather appealing only for those who prefer the other works of those involved or who generally prefer this sluggish, plodding form of doom-riddled traditional metal.

Does it sound good? Order it from here:
https://metalonmetalrecords.bandcamp.com/album/albert-bells-sacro-sanctus-ad-aeternum
Posted by slayrrr666 at 11:39 AM